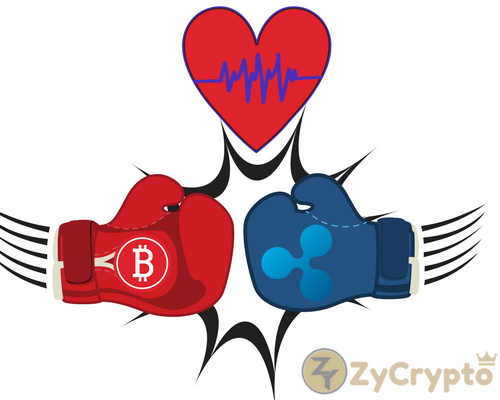 The cryptocurrency market has been bleeding out for some time but the depression in the market is slowly fading away and the proposal of the new regulation is becoming powerless to maintain the selling pressure.
Cryptocurrency traders monitored the flow of negative and positive news as a plan of action to find the bottom. When the price has not been affected by the downfall most of the time that’s an indication that the trade has no more zest left in it and only the upside would pop.
Some investors who are very hidebound, decide to check the positive headlines before leaping into the merchandise.  Each approach has their own individual advantages, neither of them overthrows the other.
The news flow in the crypto market is changing, and there are more affirmative headlines than the contrary ones.
The resurgence of both Ripple and Bitcoin leaves a question on which would lead the way in the future.
Bitcoin is a mega-powerful currency which was created by Satoshi Nakamoto. The maximum quantity of Bitcoin is 21 Million Bitcoin units.
The next generation of payment networks is Ripple,  a real-time gross settlement system, currency exchange and remittance network created by the Ripple company which was set up to engage the financial industry leaders.
Santander, a Spanish banking group has announced that their upcoming mobile payment app will use Ripple’s xCurrent tech to service their clients in Spain, Brazil, the UK and Poland.
The UAE exchange has also announced the use of RippleNet to make cross-border payments as they intend to become paperless by 2021.
The significant news flash is that, Saudi Arabia’s Central Bank under the supervision of Mohammad bin Salman will work on an experimental project with Ripple to assist the country’s banks.
That being said, Saudi Arabia is not the first central bank to tag along with Ripple’s technology. The Bank of England began a prelim with Ripple last year. However, the adoption of any specific technology is not made clear while the fiat-denominated digital coins by companies such as Tibado have made an establishment with the bank. Tim Jones, from Tibado, said that according to his views the adoption of digital currency is a must for central banks.
Moody’s, a rating agency, anticipate that bitcoin’s future listing would not harm CME’s risk rating. The crucial gist is that the Bitcoin’s volatility could have been the biggest menace to the CME. However, the implementation of higher margin prerequisite by the CME, kept things in check which changed Bitcoin’s volatility nature.
The governor of European Central Bank proclaimed that Bitcoin features are listed by US exchanges.
These positive stories of both Bitcoin and Ripple together seemed to be an agreeable affirmation to crypto investors, though the situation is uncertain.