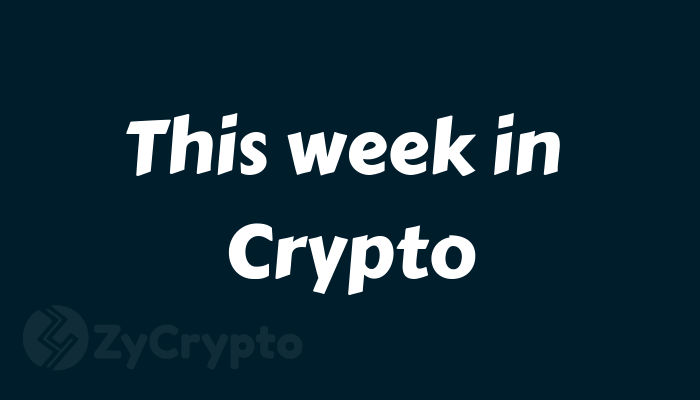 During the course of the week, many events took place in the crypto space, one of the most remarkable being the market recovery that nearly all cryptocurrencies have witnessed. Bitcoin also recovered to $4,000 for the first time since the crash which started in November 2018.

This week’s roundup like the previous ones is a summary of the major stories in the week.

The new leader in smart contracts and dapps Tron reached a major milestone of 100 million daily transactions. This was announced by Justin Sun on his Twitter page in the course of the week. This is a remarkable considering the company hit one million transactions only last month, meaning it has reached 100x of its peak last month. Tron is one of the cryptocurrencies that have defied the bear market as seen in its exponential increase in transaction volume.

United States’ President Donald Trump appointed Mick Mulvaney, a cryptocurrency enthusiast as his third Chief of Staff in three years of his tenure. The new Chief of Staff has historically been an advocate for blockchain technology and his appointment is expected to mean a positive influence on the blockchain ecosystem.

Trump has made several other appointments in the past which favored crypto friendly appointees. Such appointments included two SEC chairmen and a SEC commissioner. The recent appointment of Mulvaney should ideally help to push forward the blockchain industry in terms of legislation.

The cryptocurrency market has been on its way to a substantial recovery which commenced within the week. During the recovery, EOS and XRP have seen massive gains in daily transactions which may be maintained for a long time. EOS has reached $1.24 billion daily transaction volume while XRP gained nearly $200 million to reach a daily trading volume of $819.67.

In the course of the recovery, XRP may be likely to initiate a bull run before the end of 2018. This is indicated by the strength the cryptocurrency demonstrated by gaining momentum while other cryptocurrencies crashed. It was at the time that XRP replaced ETH at the second spot pushing it down to the third place. Experts, therefore, believe the asset could experience a breakout soon.

During the week, another bullish prediction was made concerning Bitcoin (BTC). Spencer Bogart, a co-founder and managing partner of Bitcoin Capital, said BTC will reach $50,000 and now is the best opportunity to buy especially as the price goes lower. According to Bogart, there are promising signs that the asset will experience a price surge in the near future and all who don’t buy now will regret when the price boom arrives.

The December recovery of BTC from the year low of $3,200 has been quite unexpected and has also served as a sign of better things to come for the cryptocurrency. The unexpected bounce has changed the expectations of industry experts, investors and enthusiasts to expect great things soon. Many now expect BTC to break out of $5,000 soon, at least before the year ends.

Cryptocurrency enthusiasts prefer gifts in XRP rather than BTC or XMR

XRP has made a lot of isolated progress in the last month which is hardly surprising as most crypto enthusiasts prefer to receive gifts in XRP than any BTC or XMR. According to a Twitter poll by Globee, most of the respondents voted for XRP as their preferred medium for receiving gifts followed by BTC and the XMR. although the poll was limited to the number of Twitter users who came across the Globee page, it was still a good indicator of choice among crypto enthusiasts which to a large extent explains why XRP is soaring.

In the midst of XRP’s market feats, a crypto whale was noticed to have sent 20 million XRP to a Bitstamp address. This event was recorded at 13:24:20 (UTC Time) on 20 December 2018. The sender obviously had no intention to hide details of the transaction as the XRP community easily traced it to unveil several intimate details concerning it. One striking thing is that the transaction only cost  0.000045 XRP which is a negligible fee as Ripple provides one of the cheapest payment services in the world, no wonder they are getting so popular.

There has been the confusion concerning whether XRP is a security or not. To clarify the issue, CEO of Ripple Brad Garlinghouse says XRP is not a security. According to the CEO, XRP exists independently of Ripple the company that owns it and so cannot be referred to as a security. He added that XRP is capable of existing without Ripple so cannot be a security. This is an important clarification as this issue has been a serious controversy that has held several investors and enthusiasts.

Lawmakers to exempt cryptocurrencies from the definition of securities

Facebook the social networking giant may have plans to go beyond just social networking into the cryptocurrency industry. According to an insider report, the company is looking into incorporating cryptocurrencies into WhatsApp, its messaging application. Specifically, Facebook will be going into stablecoins probably motivated by the currently highly volatile cryptocurrency market. Although the initiative is in its infancy, it is expected to become a reality soon.

Finally, on the weekly roundup, Bakkt is likely to get approval for its Bitcoin futures contract platform. The platform was expected to be launched in December 2018 but the approval was delayed and the launch postponed till January 2019 due to incomplete plans for the smooth take-off of the platform which the company may soon complete and get an approval. Among other things, the approval is expected to attract institutional investors to Bitcoin and significantly boost its market.