Coindesk recently released its “State of Blockchain 2018” Research Report, giving insights on market trends and preferences, the evolution of the cryptocurrency markets and other blockchain-based tokens, as well as consumer preferences in these areas.
This type of study allows investors and developers to make more effective decisions regarding the actions to be taken according to market behavior.
Despite the negative opinions expressed by big representatives of traditional banks and financial firms, numbers look very promising for those involved in the blockchain world.
Bitcoin turned out to be the king of cryptocurrencies based on the storage of value: In 2017 it provided a 1278% year-to-date return, while the rest of the altcoins and tokens surpassed about 700% of return. These figures far exceed the traditional markets which generated an average maximum of 23% for the most profitable (global equities). 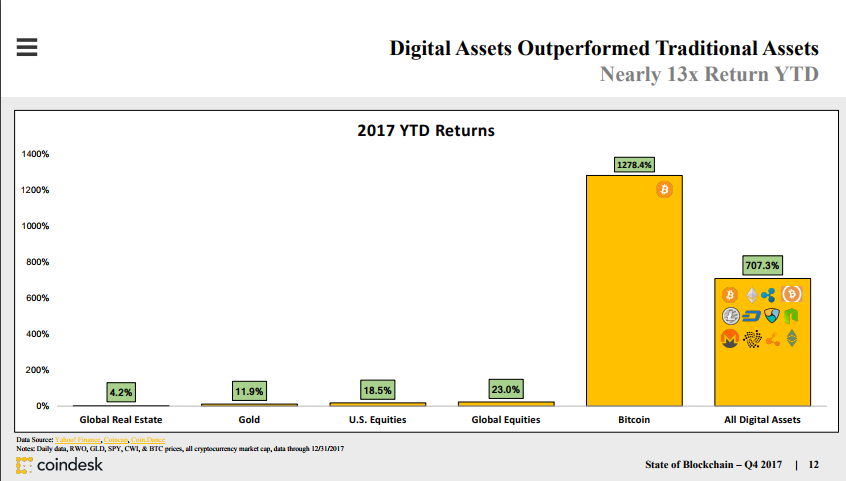 But while Bitcoin is the king in value storage, Ethereum begins to rise as the King Network with its cryptocurrency, Ethereum, as the one with most transactions, duplicating its numbers against bitcoin. For the last quarter of 2017 Ethereum had 589,171 Tx’s and Bitcoin had 319,085. This is the result of low transactions, rapid block generation, and the rise of Smart-Contracts ERC20 as well as the credibility and adoption of Dapps. 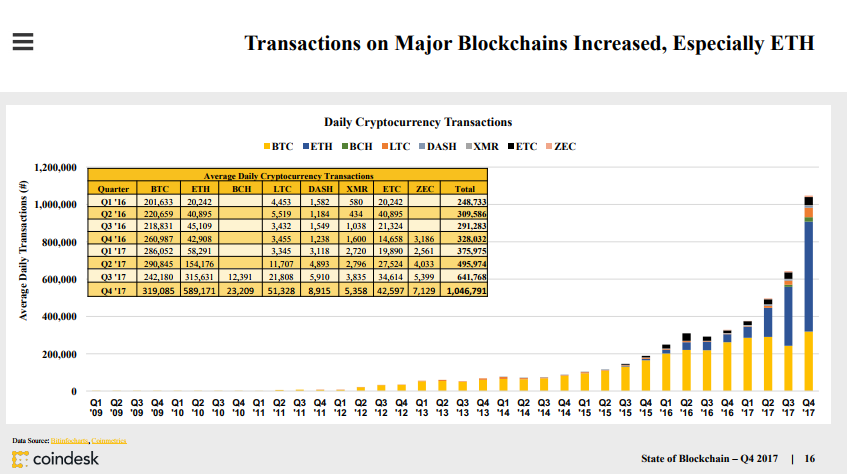 In general, there is a higher percentage of optimism regarding ETH: 93.7% of the volunteers surveyed thought the price of Ethereum would increase in 2018, with only 87.3% believing the same for Bitcoin. Also, 69% of respondents felt confident that the price of Ethereum would go up in 2018, while only 45% thought Bitcoin would increase substantially.
The figures show a positive outlook for the main cryptocurrencies listed on the report: BTC, ETH, BCH, ZEC, XMR, XRP.
Although it is not a majority, a considerable percentage feels that Bitcoin is a bubble (47%)
The study allowed to conclude that the visions regarding bitcoin and ethereum are different. While most of the interviewees think of Bitcoin more as an asset of immutable value which makes it a good reference against other altcoins.
Ethereum is seen more as a network, providing protocols for future developments, which gives more confidence in the growth of Ethereum over Bitcoin, as it is used for more activities. However, it is important to note that the most voted negative aspect was the probable buggy smart contracts with 40.7%. 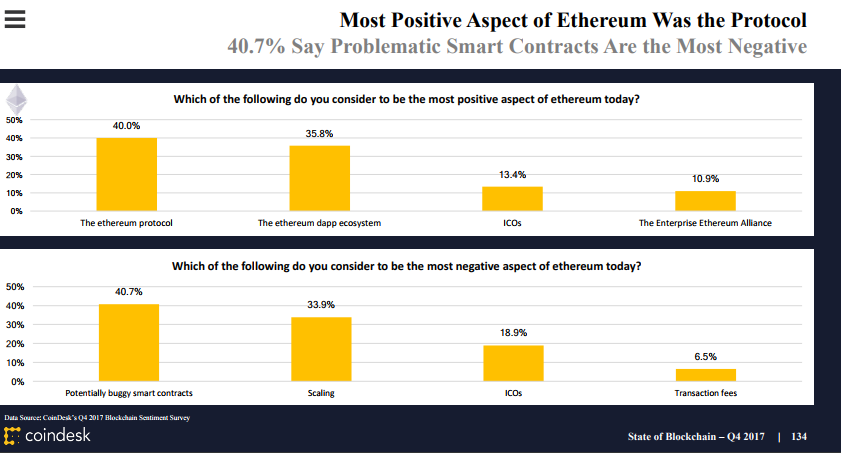 Another interesting fact showed by the report was that 81% of the subjects did not go into debt to buy crypto but of those that did, 52% already paid it back. (Such R.O.I. is hard to see on traditional Markets). Also, 94% of the subjects check prices at least every day which is a sign of the interest that the community have on bitcoin and altcoins.
Images Via CoinDesk