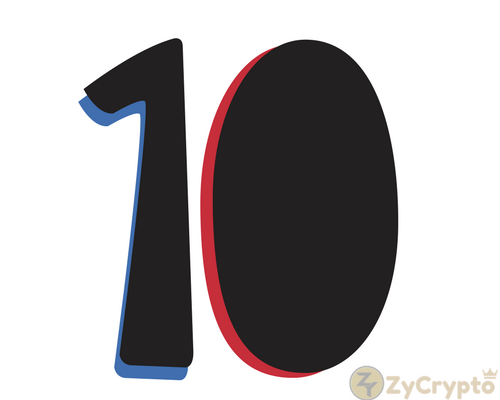 2018 began with a bitter taste for some cryptocurrencies enthusiasts, with the bitcoins biggest drop ever, a series of exchanges hacks, scams, scandals and rumors of government controls. However, many analysts confirm that 2018 may be the most important year in the history of the adoption of cryptocurrencies.

Improvements in protocols, acceptance by large companies and even promotion of their use by some governments are one of the reasons that could be used to debate with those who have pessimistic opinions.

In this article, we present some of the cryptocurrencies that are worth following and that could be beneficial for investors. Like everything, being so many options, making a list of only 10 picks leaves many interesting options out, but allows to help new adopters seeking information attracted by the advantages that the use of cryptocurrencies means.

The article is divided into 2 parts. The first one list the top 5 “known” coins and the second does the same with the “emerging” ones
Among the 5 “known” cryptocurrencies there are:

Bitcoin has been the king of cryptocurrencies since its creation in 2008 in the midst of a financial worldwide crisis.

Since then, its acceptance and use have been emerging and since the famous first commercial operation in Bitcoins, where Laszlo Hanyecz offered 10,000 BTC for 2 pizzas on May 17, 2010,  much has happened, making bitcoin the most profitable currency in the world (when compared to other currencies and traditional commodities). Today, with that same amount of BTC, Mr. Hanyecz could be considered a Bitcoin Millionaire.

If you want a globalized investment, Bitcoin is the option for you
More Information: www.bitcoin.org
Explorer: http://www.blockchain.com

Created by Vitalik Buterin, Ethereum emerged as an alternative to bitcoin aiming to expand its horizons and possibilities. The strong development of its source code to allow the execution of Smart-Contracts could revolutionize the world of finances and commercial relations at a global level.

Also, the fact that it can be mined with GPU’s has made its adoption so massive that today the pc gamers market have suffered due to the high cost of GPU’s that have gone from being artifacts for gaming and graphic design to “money-making machines” thanks to mining.

If you want a promising option beyond finances, Ethereum is the option for you
More Information: http://ethereum.org
Explorer: http://etherscan.io

Launched on April 18, 2014, Monero has come a long way, with a stable value until the beginning of 2017 (the year of the cryptocurrency boom). Its source coude is far different from that of bitcoin, generating a level of privacy impossible to obtain in transactions with BTC or any of its forks. It has an open source code aiming to be the most secure, private, and untraceable cryptocurrency available right now.
If you want privacy and anonymity, Monero is the option for you
More Information: http://monero.cc
Explorer: https://moneroblocks.info/

If Bitcoin is digital gold, then Litecoin is digital silver. Litecoin was created by Charlie Lee, a former Google employee, aiming to provide its users with a payment platform that allows them to operate with extremely low fees and quickly transactions, problems that are today’s  Bitcoin’s main issue:

High fees and blocks mined every 10 minutes with a very dirty mempool. Litecoin has been gaining acceptance along with Bitcoin as a means of payment in several businesses, which benefit from the advantages offered, making this an excellent opportunity to invest
If you want stability and low fees, Litecoin is the option for you
More Information: http://litecoin.org
Explorer: https://chainz.cryptoid.info/ltc/

Loved by ones, Hated by others, Ripple is perhaps (along with Bitcoin Cash) one of the most controversial and currencies of the ecosystem. It generates such contradictory opinions it is impossible to have an objective point of view of what it represents through the analysis of statements made by just one single expert (or even of a group).

More than a competition for Bitcoin, Ripple could be considered a competition to interbank payment system SWIFT Created by web developer Ryan Fugger, businessman Chris Larsen and programmer Jed McCaleb, Ripple has licensed its centralized private blockchain technology to over 100 banks, and faced with accusations of having a philosophy that represents the opposite of what cryptocurrencies pursue, Ripple’s CEO just told Fortune:

If you are the kind of person who invests in anything profitable and doesn’t care about philosophical debates, then Ripple is the option for you
More Information: https://ripple.com/
Explorer: https://xrpcharts.ripple.com/#/graph/
Honorable Mentions for “known” cryptos: (BCH, ETC, NEM)
Among the 5 “emerging” currencies to invest we chose:

IOTA is one of those alternatives that seek to break paradigms. Although up to now the cryptocurrencies market has been based on the application of blockchain technology, IOTA intends to go a step further:

Its development is based on a new technology whose support, the Tangle Protocol, eliminates the blocks and connects all users in a distributed way eliminating waiting times and commissions product of mining-associated to the blockchain.

This would make IOTA the logical choice to make payments by eliminating the surcharges associated with the use of mining to verify transactions. On its website, the developers present their project with these concrete but promising words:

“IOTA is a groundbreaking new open-source distributed ledger that does not use a blockchain. Its innovative new quantum-proof protocol, known as the Tangle, gives rise to unique new features like zero fees, infinite scalability, fast transactions, secure data transfer and many others. IOTA is initially focused on serving as the backbone of the Internet-of-Things (IoT) “.

According to Wikipedia: “The Internet of things (IoT) is the network of physical devices, vehicles, home appliances, and other items embedded with electronics, software, sensors, actuators, and network connectivity which enables these objects to connect and exchange data. Each thing is uniquely identifiable through its embedded computing system but is able to inter-operate within the existing Internet infrastructure. “Which would mean for example that your washing machine would automatically buy your detergent or the lights of your house would light up when you arrive, your coffee maker could make your morning coffee and ask the supermarket for a supply of coffee, sugar, and milk …  all by itself. The future is infinite.

If you want innovation IOTA is THE option
More Information: https://iota.org/ and https://iotasupport.com/whatisiota.shtml
Explorer: https://thetangle.org/

Launched on 22 March 2014, Groestlcoin is a cryptocurrency that aims to be multipurpose and innovative. Groestlcoin was the 1st cryptocurrency ever to activate Segwit (January 24, 2017) and the first one ever to perform Lighting Network transactions (April 26, 2017).
That allowed it to be a cryptocurrency with close to zero fees having one of the lowest verification times among all cryptocurrencies. After being implemented by GRS, such protocols began to be adopted by other cryptocurrencies (bitcoin included). GroestlCoin offers one major development at least every 3 months.
Among the innovations of GroestlCoin there are (In addition to the successful adoption of Segwit and Lightning Network):

If you want innovation and early adoptions of continuously developed new technologies GroestlCoin is the option for you
More information: http://groestlcoin.org
Explorer: https://chainz.cryptoid.info/grs/

Nano is just the rebranding of Raiblocks (XRB), an altcoin that has been increasing its credibility (and value) thanks to the innovative approach it provides on the use of blockchain technology to process payments and transactions: Instead of having one blockchain for all the coins , Nano uses a block-lattice structure.

Nano is already completely mined, so the opportunity of investment comes from the already wide adoption of the coin, as well as the chances it offers to develop new implementations of blockcahin technology

Also known as “The Chinese Ethereum”, NEO (formerly known as AntShares) in addition to providing a promising technology also benefits from the cultural preference and roots of the Chinese for the autochthonous, for the “home made”.

Binance, Baidu, Weibo and Wechat, represent in their fields some companies that provide services that have not been replaced by western giant competitors, and despite government prohibitions, culturally there is an acceptance that is common in the most populated country in the world.

Blockchain Investor Noam Lenderson said “Neo’s objective, while ultimately utilizing many of the same technologies as Ethereum, is to be the platform for a new smart economy.”
Even though it is based on ETH, the use of NEO provides certain advantages since it allows the use of more programming languages for smart-contracts .NET, JAVA, C #, Go, Python (Soom) and JS (Soon)
If you want to dive into Asian markets and are attracted to the possibilities of operating with SmartContracts, NEO is your option
More Information: https://neo.org/ (if the page is loaded in Chinese, simply scroll down to the end and on the lower left you will see the option to translate it to English and German)
Explorer: https://neoexplorer.co/

Created by a former member of Ethereum Team (Charles Hoskinson) and launched on September 29, 2017, Cardano seems to be a very strong competitor for Ethereum and Ethereum-based cryptos. The scientific orientation of its development team, as well as its philosophy, make it attractive to an audience eager to see the basing and credibility that support blockchain technology.

Reading a Whitepaper written by a group of enthusiasts will never be the same as reading a scientific work which explains step by step the foundations that support its development and philosophy. This approach has led the ADA to gain followers over time, and its developments are subject to deep debates beyond everyday chit-chat.

The Ouroboros protocol, sidechains implementation, layer-based designs and other projects support the future potential of this project Cardano is still at a start-up stage, with a number of projects under development, abe to be tracked here https://cardanoroadmap.com/

If you are into deep philosophical and scientific reading and want to know every single aspect of what you are getting into, then Cardano is the best option for you
More Information: https://whycardano.com/
Explorer: https://cardanoexplorer.com/