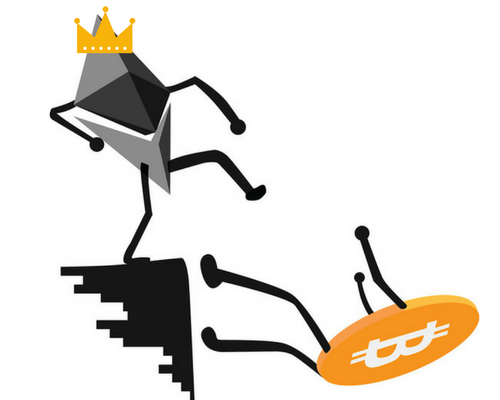 Cryptocurrencies market has been perhaps the fastest growing market in recent years, with bitcoin at the top consider the most profitable investment being the biggest marketcap cryptocurrency in history.

Such huge growth in the value of bitcoin as a medium of exchange has been due to the benefits it offered. Decentralized, reliable and fast payments with minimum fees. But precisely because of its growth and acceptance, some of its virtues have become obstacles for its existence.

While previously people talked about times of few minutes to verify of a transaction, the congestion caused by the high amounts of bitcoin dealings has increased the verification time to hours, especially for those whose operations are so small (micro payments ) that do not deserve the wait. Not everyone is willing to pay $ 6 to verify a small transaction of $ 10.

To solve these situations, ETH has emerged as a strong competitor gaining acceptance every day thanks to the advantages it offers and the potentials of its network, with Smart-Contracts being one of the fundamental pillars that could be used in the future making Ethereum a possibly better option to be considered against Bitcoin.

Also, transactions in ETH are much faster when compared to btc, with a considerably “cleaner” mempool. This problem has been tried to be solved in bitcoin through the implementation of segwit2x, but it is an area in which ETH takes the lead.

Similarly, the value of feess, much lower in ETH than in btc has made it an attractive currency, for those who operate with cryptocurrencies on a daily basis. Likewise, the possibility of mining with GPUs makes it a more attractive investment for new miners and people who want to earn extra income.

Just as a comparison, even after Segwit2x, the least pending Tx’s on bitcoin mempool is the same as the biggest pending Tx’s on Ethereum. This is a very strong point for ETH, making it a much better option for those who want to verify payments quickly (being that the purpose of today’s cash).

ETH is currently the second most important cryptocurrency according to coinmarketcap.com and has sustained its growth, going from $8 in 2017 to a historical high of $ 1389 for January 2018.

2018 may be the year of consolidation of the coins. And while BTC is emerging as a means to store value, ETH seems to consolidate itself as a means of daily exchange, solving many problems and creating new opportunities for the future. Right now, ETH has the same value BTC had on Jan 2017.

What’s your own view on this possibility ?, are we going to see Ethereum as the New Crypto king ?, Let’s know your thought in the comment section below.