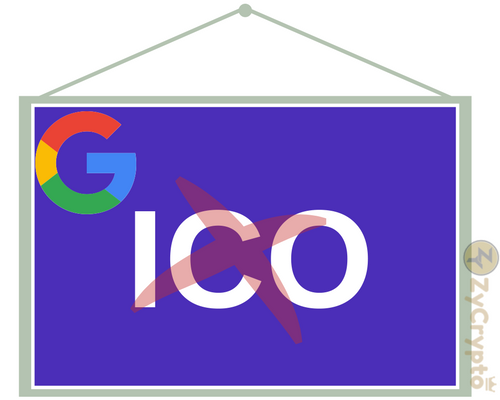 With the exponential rise in the price of bitcoin in 2017, the entire world got interested in bitcoin. Even companies looking to raise funds for their businesses now prefer organizing initial coin offerings rather than Initial Public Offerings (IPOs).
Although the ICO environment is still largely unregulated, giving rise to a lot of scam projects, a lot of legit cryptocurrencies that are around today were released during ICO events.

Google have announced a change in policy that will ban online ads related to ICOs, Cryptocurrencies, contracts for differences (CFDs), rolling spot Forex and financial spread betting. These are all seen as high-risk products.  An excerpt from the announcement states that the ban also extends to:

The media giants also stated that aggregator sites and affiliates that buy Google ads will no longer be permitted to display promotional materials related to cryptocurrencies. In essence, even third parties using the company’s advertisement products will be affected by the ban.
Google has said that the ban is in a bid to curb scam in the crypto ecosystem and protect the masses. Commenting on the latest development, director of sustainable ads at Google, Scott Spencer said that:

“We don’t have a crystal ball to know where the future is going to go with cryptocurrencies, but we’ve seen enough consumers harm or potential for consumer harm that it’s an area that we want to approach with extreme caution.”

According to Google’s annual “bad ads” report, about 3.2 billion ads were stopped last year, due to a violation of the company’s advertising policies. Also, Google has hinted that it blacklisted 900,000 websites as well as about 700K mobile applications that ran afoul of its ads policies.
It might interest you to know that Google is not the only advert publisher that has turned its back on cryptocurrencies. Back in January, social media giants, Facebook announced a policy change, stating it’ll no longer display all bitcoin and crypto related adverts.
Crypto enthusiasts strongly believe that placing a ban on ICO and crypto related adverts is really not the solution to the problem since even legitimate blockchain-based companies will be affected by this draconian move. Banning crypto ads is not a way to regulate the digital currency industry. Instead, it’s a way to crush innovation.