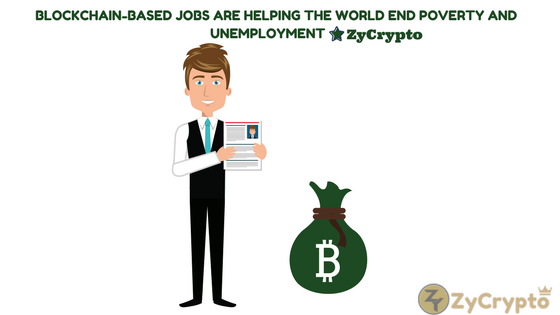 Since Bitcoin created in 2009 by Satoshi Nakamoto, the world’s first cryptocurrency in 2009 the cryptocurrency ecosystem has been on a forward match since then.
In the beginning, just a handful of people especially computer programmers and technology enthusiasts had interest in Bitcoin and Altcoins. However, more people began to notice Bitcoin and cryptos since the latter parts of 2016 when the massive bullish Bitcoin trend set-in. Bitcoin has also made the demand, and investments in cryptocurrencies to skyrocket, creating various job vacancies for Blockchain experts.
Keen Interest In Cryptocurrency Jobs
Lately, job postings relating to Blockchain and cryptocurrencies have become a commonplace.  As noted by a job search website www.indeed.com, the number of job vacancy postings associated with Blockchain, and cryptocurrencies have risen by nearly 621% since November 2015.
Some companies like Uber, eBay, Capital One, Match.com, and GEICO are few examples of companies that have searched for and interviewed job seekers who have listed “Bitcoin” or “Blockchain” in their curriculum vitae.
Jobs based on cryptocurrencies and Blockchain are often found on social media apps like Reddit, with subReddits like r/forhire, r/Jobs4bitcoin and many more, often displaying job postings related to Blockchain technology.
It is essential to note that there has been a 1,065% rise in job searches on indeed.com related to cryptocurrency and Blockchain. There is also an array of websites that Blockchain experts can find suitable employment on a freelance basis and full-time work. Websites like www.xbtfreelancers is an excellent place to find crypto jobs, with employers posting new vacancies almost every day.
This new trend points to the truth that employers and workers in Bitcoin and Blockchain space are on the rise and if this trend persists, within five to ten years time, Bitcoin and Blockchain technology would have gained a widespread adoption all over the world.
Some Examples of In Demand Blockchain-Related Jobs
Some of the hot jobs in Blockchain environment include Blockchain app development, project managers, cryptocurrency miners and technicians, data scientists, crypto news writing and reporting and many more job titles could be found on cryptocurrencyjobs.com, Xbtfreelancer.com and a host of other sites. In the crypto workspace, employees get paid in Bitcoin and their preferred Altcoins, and if it’s an ICO project, workers would usually receive the new coins or tokens being created, in addition to getting paid in fiat or cryptocurrency.
The first point of call in securing a Blockchain based job is to fire up your passion and enthusiasm for Blockchain and then to move on to learn any aspect of the Blockchain technology that suits you. Most Universities are yet to start offering Blockchain courses, but you could start learning about Blockchain technology by taking Princeton’s Bitcoin and cryptocurrency Technologies courses via Coursera, at www.cousera.org/learn/cryptocurrency.
In addition, it is often a good move to have prior background in the area of Blockchain endeavor you see you feel like pursuing a career. For example, if you want to build Blockchain based applications, it becomes more comfortable for you if you had a prior understanding of programming.
With the continuous integration of Blockchain and cryptocurrency by small firms and established corporations into their operations, the need for talents in the Blockchain technology field is expected to rise further in soon. Why not join the Blockchain revolution today and secure your future.