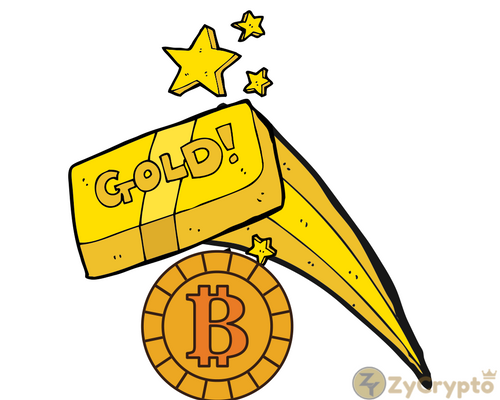 There has been recent debate over whether Bitcoin is comparable to Gold, coinciding with a recent report by the World Gold Council on the similarities and dissimilarities.
The World Gold Council published a recent report on January 25th and it had a special focus on the rise of cryptocurrencies. The report focused on key issues regarding competition from Bitcoin and on the possibility of cryptocurrencies replacing gold in general.
Many have wondered whether Bitcoin could replace Gold as a form of currency and become the new gold standard. Such a question was debated recently by Jim Rickards and James Altucher with the arguments for gold winning.
Yet supporters of Bitcoin such as Cameron Winklevoss suggest that Bitcoin will disrupt gold and become gold 2.0.
The big difference between gold and Bitcoin is that gold is much more stable. The World Gold Council pointed out that gold has risen around 12% in a steady fashion over a year. Bitcoin, on the other hand, has risen around 1,116% over a year with tremendous swings of volatility.
The World Gold Council has argued that gold and Bitcoin are very different and that it would be like comparing stock markets to gold.
Gold has very different markets to Bitcoin such as the jewelry market. The Gold Council pointed out that gold has tangible uses such as with jewelry and even computer chips. Gold, unlike Bitcoin, can be used as a physical product.
The gold standard seems to not be threatened by rising interest in cryptocurrency because its stability makes it a useful currency backer. The problem with Bitcoin as a gold 2.0 is that you couldn’t rely on it to pay regular bills.
One week, for example, you may be able to pay your rent but you can’t guarantee that it’ll be affordable the next week. Bitcoin’s volatility is the key difference between gold and itself.