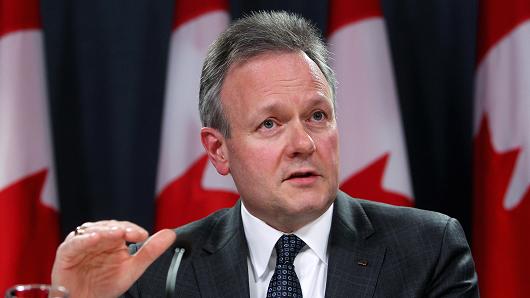 Bitcoin trading is “gambling,” says Canada’s Central Bank Governor Stephen Poloz to CNBC on Thursday, though he doesn’t discard issuing Central Banked digital currencies
Bitcoin is a generalized phenomena so young right now that it is hard to deeply understand its behavior, even for big respected personalities such as Canada’s Central Bank Governor Stephen Poloz, who questioned the term “cryptocurrency” by stating that bitcoin and another altcoins “are crypto, but they are not currencies” on an interview with CNBC’s anchor Karen Tso
When questioned about “what are they”,he stated:

“I’m not really sure what they are … They are not really assets … I suppose they are securities technically … There is no intrinsic value for something like bitcoin so it’s not really an asset one can analyze, it’s just speculative or gambling. “

This is a problem for the big financial organisms that control the international economy, since they can not have a complete management of the big picture, which obviously bothers those who during the last century have managed international finance according to a perfectly studied and developed scheme.
Mr. Poloz said that there is no intrinsic value that one can analyze, which makes bitcoin and the rest of the altcoins not really behave like a real currency.
This comment motivated the interviewer to ask if she considered the bitcoin a bubble or a fraud, in order to clarify wether I have shared such points of view or not:
“Many words have been used, but we think that is, buyers should beware… It’s more closer to gambling than investing” he said, joining voices with other personalities from the world of traditional finance such as J.P. Morgan CEO Jamie Dimon, Mr Warren Buffet, Lars Rohde, head of Denmark’s Central Bank and Jim McCaughan, whose statements demonstrate their pessimism or at least distrust when asked about this new mechanism of exchange and storage of value
A step forward in the evolution of banking
But despite his personal insights, He also talked about CBDC, acronym for Central Banked Digital Currency, a project in which apparently a large number of central banks have joint forces. According to him, Central banks provide a “risk free medium of exchange or store of value, which we call bank notes or currency … Actual currency”.
He said that today’s fiat currency provide such security, and if people prefer it to a digital form some day, then that’s what they will do. The idea they have is providing a token backed by fiat money in order to make “small change” easier to transport using digital wallets. Something like a central banked “tether” cryptocurrency
When asked about an ETA for such a digital currency he said that there are many kinds of issues that need to be understood well before making big announcements, so there is no need to rush.
According to him, today’s cash is still doing the job it is supposed to be, so there will not be a substitution right now, even though he admitted such a event could happen “sooner than later”
“It’s only when cash loses its effectiveness, in that ultimate phase, where we might feel the need to replace it or add to it a digital form”
No need for blockchain
Despite his harsh statements, Mr Poloz stated that blockchain technology is a “true piece of genius” which could be applied in many areas of the economy, but not in the area of ​​actual backing to currency. In this regard, he still believes that the trust and transparency provided by bitcoin and/or altcoin transactions are no better than the centralized control of central banks.

“If a central bank (as the Bank of Canada) were to issue a digital currency, you already believe in canadian dollar… You don´t need a distributed ledger in order to believe you recieved final payment”

By saying so he means there is no need to trust blockchain technology in order to issue digital curreny, so the undelrying technology can be separated from the concept, having a centralized digital currency not based on distributed ledgers.