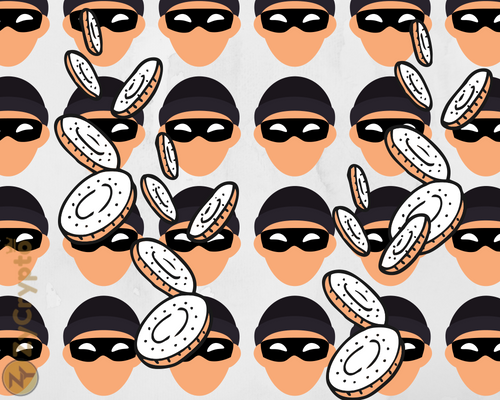 A cybersecurity firm has published a shocking report about just how much money cyber criminals have stolen from crypto users this year. The report, compiled by Carbon Black, indicates that upwards of $1.1 billion worth of cryptocurrencies has been lost to criminals.
CNBC reports that these criminals use the dark web to share hacking tools and sell their loot. It is estimated that there are over 34,000 listings regarding crypto theft spread over 12,000 market places in the dark web. These marketplaces have expanded into an economy worth $6.7 million.
As confirmed by Rick McElroy, a strategist at Carbon Black, cyber criminals don’t have to know how to code since the malware they need to carry out their activities is readily available for easy purchase on the dark web and often comes with customer service too.
Going further, McElroy opines that most of the cyber theft and attacks are actually carried out armatures with bought malware and ransomware as opposed to those by organized groups of cyber criminals with coding skills. He said that some employed engineers often engage in cyber crime to get some money, adding that investors should learn how to secure their cryptocurrencies, especially those using cloud platforms.

Exchanges Are The Most Hit

The report indicates that the most prevalent targets for such crimes are the exchange platforms. Just recently, hackers stole NEM tokens worth over $500 million from Coincheck, a Tokyo-based exchange. Another exchange, Bitfinex, was targeted with a Denial of Service Attack. However, the attackers didn’t manage to steal anything.
Next to exchanges are the businesses, with about 21 per cent of the attacks targeting them. According to the report by Carbon Black, the main line of attack against businesses by attackers is encrypting their files and demanding a ransom in return for the decryption. In these cases, the attackers demand to be paid in cryptocurrencies since the payments are untraceable.

The report also reveals that most cyber criminals prefer Monero (XMR), a cryptocurrency famed for its enhanced transaction anonymity and low cost of transaction. To this effect, about 44 percent of the attacks have targeted people, businesses, and institutions dealing in this particular cryptocurrency.
Interestingly, bitcoin doesn’t appear to attract much attention from cyber criminals, as it has been targeted in only about 10 percent of the cases reported. Ranking countries, the report puts the United States at the top of the list of countries with the most reported cyber attacks involving cryptos, with China and the United Kingdom coming second and third respectively.