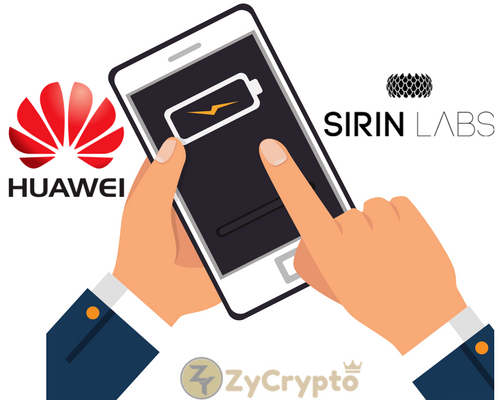 Huawei, the Chinese telecommunications giant and third largest smarthones manufacturer worldwide could be developing a cell phone with the ability to run applications based on blockchain technologies. This is a milestone for the blockchain industry, as optimization on mobile platforms is still very limited.
If this partnership becomes a reality, the massive adoption of blockchain technologies could become widespread, further helping to increase market confidence in this innovation that is still little known to users.
As said by a series of reports leaked by Bloomberg, the prestigious communications company would be working hand in hand with Sirin Labs, the team behind Sirin Os, an operating system that would make true Huawei’s claims to run blockchain alongside with Android a reality. There is no agreement yet, but preliminary talks are underway on what could be a milestone for blockchain industry enthusiasts.
According to statements from Sirin Labs’ board of directors in his official Telegram group, the meetings seem to be on the right track, which is a positive sign that the deal could be successful:

“Amazing meeting just concluded between Sirin Labs and Huawei. Among other things discussed was the possibility of cooperating together to bring blockchain technology to the masses in a secure way.”

According to the statements of a spokesman of Sirin Labs, in addition to the joint work, Sirin Labs maintains its own development. They are currently working on their own high-end, blockchain-compatible phone, which they expect to sell for approximately $1,000 by the second half of this year.
Sirin Lab’s original smartphone, the Finney, will have a native cold storage as well as a system that would allow each user to convert their FIAT money to the token of their choice. A highly convenient option for users who daily trade cryptocurrencies.
Huawei’s support for an industry like Sirin is not only positive for the blockchain industry but also for the expansion of the cellular industry. The support of innovative technologies within the world of mobile phones leads to an immense consumer acquisition, especially noting not only the accelerated growth of the cryptomarket but also the adoption of mobile phones, having countries with more than one cellphone per habitant.
Huawei, which has a presence in all strats from low-spec to premium smartphones is increasing its presence in European and North American markets, taking market shares away from Samsung and Apple, which are losing popularity to a company that offers similar quality at much cheaper prices.
No official statements have been made by either company, but rumors are expected to be confirmed as soon as a formal agreement is reached, which would be the first of its kind should the talks prove successful.