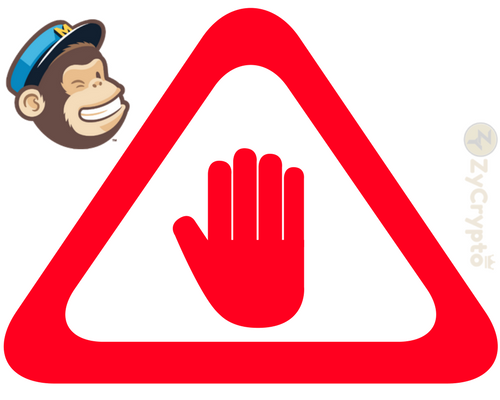 Walking in the footsteps of Facebook and Google, the email provider MailChimp has now announced that they are now yanking off support for cryptocurrency advertisements on their website as well as their email distribution platform with immediate effect.
The company made an announcement on the 29th of March confirming their decision. In the announcement, they said that they could not allow their platform to be used by companies and businesses who are involved in sale, transaction, exchange, storage, marketing, production and any other aspect related to digital currencies.
They would not allow anything related to Initial Coin offerings or ICO’s on their platform or would allow their platform to be used for such purposes.
The new announcement by MailChimp follows a similar announcement made by the company in February of 2018 where they said they would ban accounts caught performing activity related to ICO or blockchain.
Mailchimp’s customers were furious and enraged on the policy change by the company. They took to social media websites, including Twitter and Reddit, to express their anger and disappointment at the company as well as its management team.
One Twitter user, named Evan_van_ness, called out Mailchimp for blocking the Week In Ethereum’s email service under a span of four weeks, while another user, named Apompalino called out the company for blocking all email campaigns related to ICOs.
Both of them concluded that actions like this only seek to energize people to go for decentralized solutions where power is controlled by everyone. Calling MailChimp to be embrace censorship, their tweets got a lot of support in the form of retweets as well as replies.
Mailchimp’s spokesperson said that the company’s decision to ban such ads was due to the fact that these advertisements and emails were mostly fraudulent and scams designed to trick innocent people. The spokesperson insisted that people can still use their platform for discussion about cryptocurrencies.
The move of big tech companies blocking cryptocurrency advertisements seems to be a coordinated move, with some calling it a cartelization and forcible manipulation of the market. Just earlier this week, Twitter announced its ban on such ads, which followed similar decisions taken by Facebook and Google respectively earlier.
Cryptocurrency associations in countries like Korea, China and Russia are planning to sue these companies for using their market dominance for collusion and cartelization. They claim that the first lawsuits would be filed in May.