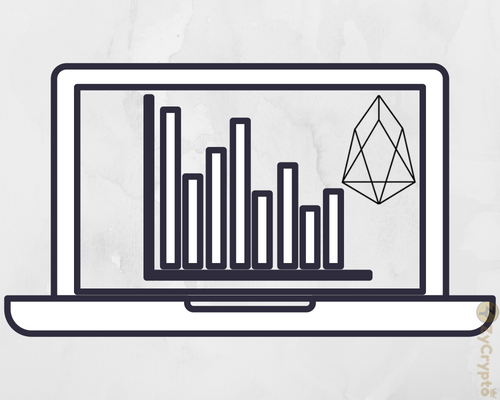 EOS, the brand new protocol coin has recently experienced major turbulence plagued by bugs and concern of centralised governance. However, the EOS markets have held strongly despite these concerns.
EOS is currently trading at $10.70 and has experienced a 3.36% price appreciation over the past 24 hours. The cryptocurrency is still sitting at rank 5th in terms of overall market cap value across the board with a market cap of $9.66 billion. This is still significantly higher that the $4 billion EOS had raised in its ICO.
The top 5 cryptocurrency has experienced a few weeks of turmoil as prices have fallen a total of 22% over the past 30 trading days. It is important to note that this price drop is experienced across the majority of cryptocurrencies across the entire market.
EOS has had a rocky start to its mainnet launch last week. The blockchain had come to a halt just a mere 2 days after the mainnet had launched due to an unforeseen bug. This raised questions as to why the EOS team did not have their code audited before going live and instead elected for public bug bounties.
Another significant question raised over the last few days concerns the centralised governance revolving around EOS’ “Block Producers”. There are 21 Block Producers maintaining the EOS blockchain. Before the EOS launch a constitution was drafted to maintain the decentralised nature of EOS, however, these Block Producers (BPs) have the power to change the constitution of EOS so long as they all agree on the changes to be implemented.
The centralised power of the BPs is ever more apparent as all BPs were on a conference call during the time that the EOS blockchain had halted, looking for a solution. On the 17th of June, the BPs had decided to freeze 7 EOS accounts that had been involved in phishing attacks during the bug until further notice. For cryptocurrency, centralisation of this fashion goes against all of Bitcoin’s ethics.
Let us analyse price action over the recent term. 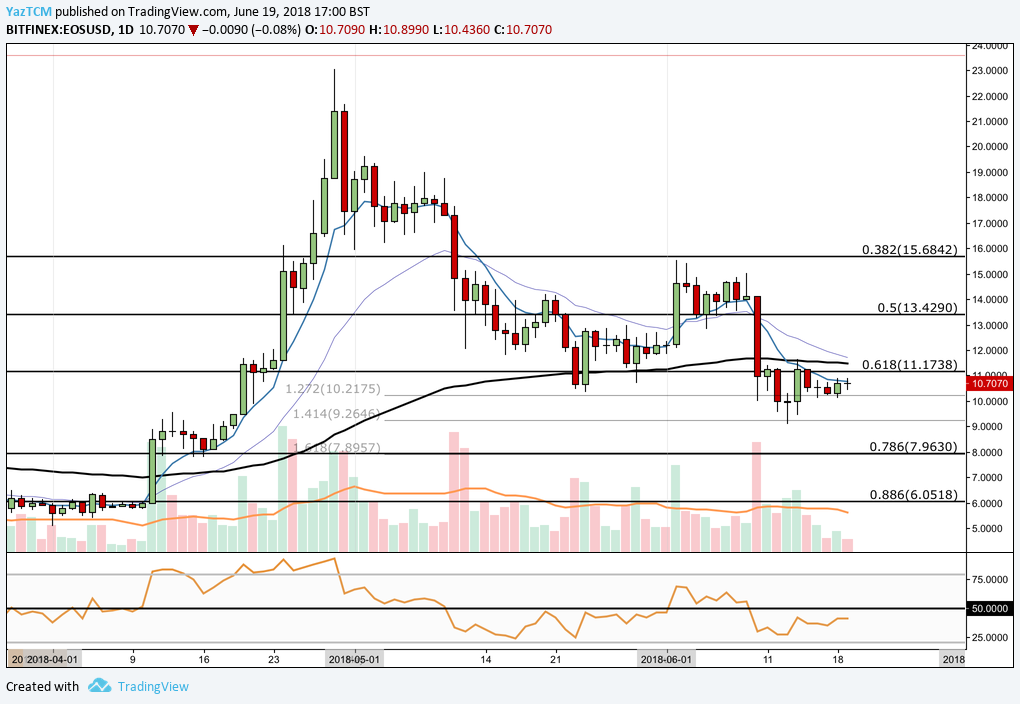 https://www.tradingview.com/x/SORQ4LQ9/
Looking at price action from the recent term above, we can see that despite allow the potential negative news surrounding EOS, the crypto giant has managed to find a significant level of support just above the $10 handle.
We can see that after the bullish run experienced in April when price action hit an all time high of $23.02, the market began to roll over and has been depreciating ever since as price is currently down 60% from this all time high. The market has retraced just past the .618 Fibonacci Retracement at a price of $11.17. This is a retracement of the overall bullish run seen during April.
We can see that during the turbulent market drops last week, EOS managed to find some support at the 1.272 Fibonacci Extension located at $10.21. This is a Fibonacci Extension taken from the bearish leg starting from the high seen on the 10th of May to the low seen a few days later on the 18th of May. Price action briefly dipped under this level and landed at the 1.414 Fibonacci Extension at $9.26 before price was strongly rejected and experienced a rebound.
If the fundamentals behind EOS begin to clear up and the questions around the bug and centralisation ease, we could see a possible bullish run pushing price up to June’s highs at $15.54. Price action would first have to break above the .618 Fibonacci Retracement at $11.17. If price action can continue above $15.68, the .382 Fibonacci Retracement, then price action is clear to retest the all time high once again.
Alternatively, if sentiment changes across EOS holders and uncertainty kicks in we could see price action drop back below $10. In this scenario support could be expected to be found at $9.26 (1.414 Fibonacci Extension) and then $7.90 which is the .786 Fibonacci Retracement.
Price action is currently finding resistance at the 7 day EMA. If it can break above this moving average and the 7 day EMA then goes on to break above the 21 day EMA this would indicate that bullish momentum within the market is beginning to grow.
Similarly, the RSI is making its way toward the 50 handle indicating that the bearish momentum within the market is fading. If the RSI can break and hold above the 50 handle this would send signals to the bulls that momentum is beginning to increase and a trend change may be incoming.

EOS has experienced a launch riddled with bugs, blockchain halts and uncertainty regarding centralisation of the Block Producers. However, the market seems to be holding strong as the EOS launch unfolds.
A break above the .618 Fibonacci Retracement at $11.17 could be the first signal that EOS is ready to trade higher. Another break below $10 would indicate that the worst of the depreciation for EOS against the USD is far from over.