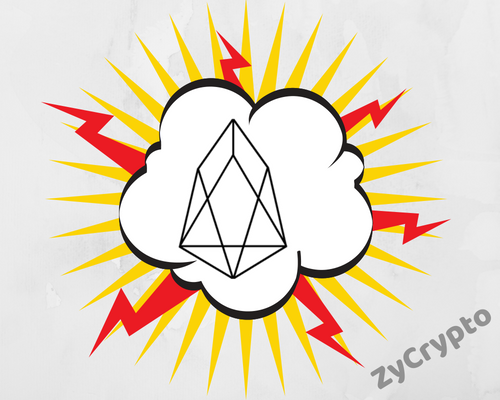 After just two days of launching its Mainnet, the EOS blockchain has ground to a halt. According to a Steemit post by the top 21 EOS block producers (BPs), the EOS network suddenly paused at 10:01 UTC on June 16, 2018.

“At 11:02 UTC, a method to unpause the chain was formulated and is currently underway. Normal EOS chain functions should be available within 3 to 6 hours from the time of the publication. Incoming connections to the network are not being accepted while the work is taking place,” the EOS team stated.

The BPs and a vast array of standby nodes keep scrambling “to identify and solve the issue, but transactions on the network remain frozen.
While no one can say for sure what the cause of the problem is, there is an 80 percent chance that the EOS Mainnet may be under a DDOS attack.
On May 31, the EOS team launched a bug bounty program on HackerOne. The group invited ethical hackers from all over the globe to hack the system to find out bugs and security loopholes.
Earlier in June, reports emerged that Guido Vranken, one of the bug hunters had been rewarded with a whopping sum of $120,000 for discovering 12 bugs in the EOS software.

“The EOS people are very appreciative of my efforts, “ Vraken said , adding “Reported bugs were quickly analyzed and fixed in their public repository. At first, the process was very ad-hoc because [EOS CTO] Daniel Larimer and I were sending files back and forth on Telegram, but they’ve since started to run a bug bounty program on HackerOne which I think is in the best interest of both bug finders and the EOS team.”

It is worth noting that EOS is the currently the highest funded initial coin offering (ICO) in history. The project has attracted roughly $4 billion so far.
Just like Ethereum, EOS is a platform for launching DApps. However the EOS team claim to have achieved interchain operability.
At current, there are over a thousand DApps built upon the Ethereum blockchain it remains to be seen whether EOS can do better.
At press time, the cause of the ‘freeze’ on the EOS Mainnet remains unknown, the team is, however, working to restore normalcy as soon as possible.