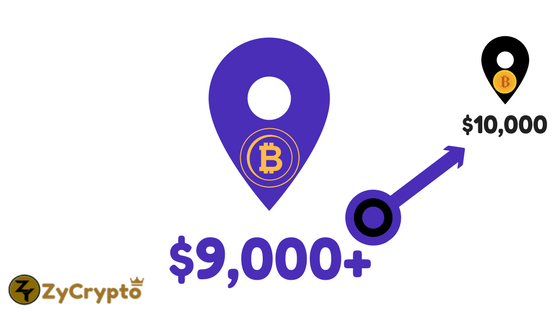 Bitcoin and its investors are having the time of their lives!. The Bitcoin bullish rally seems to be heading to the moon as the Bitcoin passed the $9,700 price area early Monday morning before making a minor pullback.
Hello Jamie Dimon, where are you? Please say something new!; one  Bitcoin is now worth over $9,600. Bitcoin- the world’s number one cryptocurrency has many high net-worth individuals as its skeptics.
Bitcoin number one skeptic is the CEO of JP Morgan – Jamie Dimon
The CEO has made a lot of degrading comments about Bitcoin in recent times. The billionaire has said that Bitcoin is a fraud and a bubble destined to burst soon;  he also noted that Bitcoin investors are stupid and that he will not hesitate to sack any of his employees who buy Bitcoin.
From his comments, it appears Jamie Dimon is probably a confused and hypocritical billionaire who doesn’t know a thing about Bitcoin. A few days ago, JP Morgan announced it would be going into Bitcoin futures once the CME group launches the Bitcoin futures trading in December.
THE BITCOIN BULLISH TREND CONTINUES
The Bitcoin price reached a new all-time high above  $9,700 analysts believe this bullish rally is as a result of more and more institutional investors getting interested in Bitcoin.
Some weeks ago the CME group announced it will launch Bitcoin futures trading on its platform in December this year.   In the past week, Coinbase – a leading Bitcoin exchange announced the launch of Coinbase custody. A service aimed at making it easier for institutional investors to invest in Bitcoin.
In South Korea, Bitcoin still trades at a high premium as usual.  As at press time, the Bithumb Bitcoin price is at $10,037 as compared to $9,524 on Bitstamp  – a difference of $513.
MORE BULLISH RALLY EXPECTED
Bitcoin was created by Satoshi Nakamoto to eliminate financial institutions and third-party constraints in financial transactions, but with the Bitcoin price making new all-time highs almost with each passing day, Bitcoin has proved too useful to be ignored by institutional investors, high net worth individuals, and even governments.
The latest financial institution to join the Bitcoin  revolution is the Seoul based Shinhan bank, which is the first bank in Korea.  The Shinhan bank was established in the year 1897 and has been a critical player in the Korean financial sector ever since.  With over 13000 employees and a total asset base of over $260 billion.
In a recent development, the Shinhan bank announced it would be launching a service that will enable its customers to deposit their cryptocurrencies with the bank.  According to the bank’s official, the service will come with zero cryptocurrencies deposit charges, but users will be charged minimal transaction fees when withdrawals are made.
The Shinhan bank further stated that users would be provided with the bank’s cryptocurrency app with which all transaction could be carried out without needing to come to the bank.
For many South Koreans, this is a welcomed development, most especially for those whose details were leaked on Bithumb – the world’s largest crypto exchange by volume.
It is pertinent to note that apart from  Shinhan Bank, some other institutional investors like the CME Group, CBOE, Man Group and  TOBAM Asset Management has either announced to launch their Bitcoin-related services or have started it already.
Analysts believe that the Bitcoin price will remain bullish until the end of the year, with possible minor pullbacks from time to time.