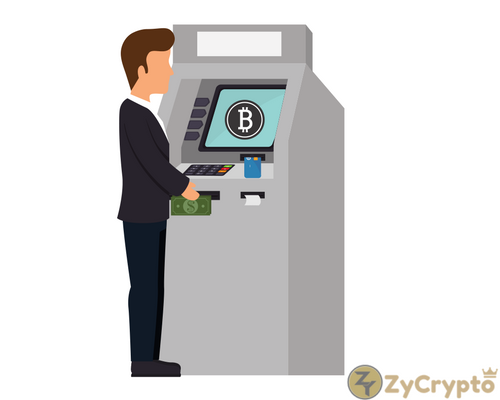 Bitcoin ATMs are becoming more common in public places around the globe. In Fox Valley locals buy bitcoin or exchange their BTC to paper money using these machines.
According to the Chicago Tribune,Bars, gas stations, local shops and public centers in Elgin, Aurora and elsewhere in  Fox valley are all supporting the crypto craze by allowing Bitcoin ATM operators install the machines at their shops and bars..
Just like the traditional cash ATMs, Bitcoin ATMs allow people to exchange fiat for the Blockchain-based virtual currency.
Northern Illinois University Media Studies Professor David Gunkel, who is also a bitcoin enthusiast said:
“People typically go online to purchase bitcoins. This is a physical manifestation of that.”
The Amstar gas station at Hill Summit avenues Aurora’s East Side has a Rockitcoin bitcoin ATM installed. In Elgin, the ATMs are stationed at a currency exchange on South State Street and at Eaton’s Redwood Inn, on West Chicago.
Larry Mascolino of CoinFlip, a firm that facilitates the spending of earned loyalty currency at the point of sale, by consumers said the company deemed it necessary to install bitcoin ATMs there to make it comfortable and convenient for the average consumer to get involved in the crypto movement.
CoinFlip rents spaces in businesses and install the bitcoin machines. For example, it pays $100 monthly to the owners of Elgin Redwood Inn and would sometimes share profits with the location’s proprietor.
CoinFlip doesn’t find it a herculean task paying the owners of the locations because it charges a fee of 6.9 percent per transaction.
Places that are open for extended hours or even run 24/7 are usually the best spots. CoinFlip has its machines inside a Naperville Vape shop and the St. Charles bar Rookies.
President of Digital Mint, another company that runs the bitcoin ATMs business, Marc Grens noted that “Digital Mint mostly locates in currency exchanges and places where people are used to doing transactions.” he also said that the Elgin Location is very close to Grand Victoria Casino. Digital Mint charges a transaction fee of about 5 to 12 percent per transaction, depending on the amount.
While there have been cases of use of virtual currencies for money laundering, paying off ransomware attacks and other illegal activities, the Elgin police say they have never had reports related to bitcoin or the bitcoin ATMs.
According to Grens, Digital Mint users are required to register with a photo ID and their mobile phone number. The daily transaction limit on their ATM is $8,000.
Mascolino said users of the CoinFlip ATMs must register and get their digital wallets and with online exchanges, to make it easier for authorities to track such a person in case of eventualities.
CoinFlip has different levels of security.
When buying up to $500, the customer is only required to enter his mobile phone number. However, for amounts higher than $500, a user must register on the platform and also provide his social security number. Finally, for purchasing bitcoin worth more than $3,000, the buyer must put a state-issued ID up to the machine’s camera and pose for a photo.
Jay Gadhiya, the manager of Naperville shop, who got a bitcoin machine installed at his shop by CoinFlip in May 2017, said:
“This is the next movement. I wanted to get ahead of the crowd. I saw it coming. It was super slow at first; now I get 50 people a week.”
Mascolino said the Blockchain foundation of bitcoin makes everything excellent.  In his words:

“The genius of the Blockchain design is what makes bitcoin inherently valuable, and it has many different applications outside of currency. Other projects apply the Blockchain to data storage, programmable contracts, and artificial intelligence.

The world will be very different in the coming decades, as the exciting potential of this new technology unfolds.”

Although crypto volatility remains a concern to some people, Bitcoin and cryptocurrencies are here to stay and would only get better with time.