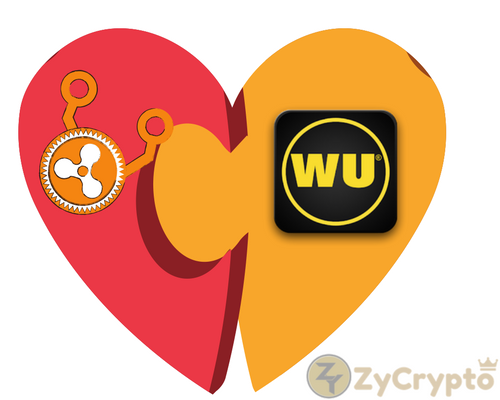 The world’s largest international money transfer service, Western Union, is poised to use Blockchain- based altcoin, Ripple in making its cross border money transfer services lightning fast and secure.
Ripple is the Key
One of the global financial services ‘big whales’, Western Union, has finally made it known to the world that it’s indeed trying to work with the Ripple digital currency, after a long-rumored partnership.
As per Bloomberg, the money transfer firm has hinted it’s weighing the advantages of blockchain technology and it’s testing transactions with the Ripple, which is owned by a San Francisco-based startup, Ripple.
Expressing his opinion concerning the development, Western Union Chief Executive Officer, Hikmet Ersek said that:

“We are looking especially in the processing settlement and working capital optimization, also in the regulation part, on the compliance part on the blockchain capabilities. And we do test, we do have some tests with Ripple.”

Western Union uses pre-funded accounts to carry out funds transfer for its customers, and this system ties up capital.
However, Ripple (XRP) has the ability to move vast sums of money faster, with very cheap transaction fees.
In a statement on Wednesday, Ripple stated that:

“We’ve been testing different products with Western Union for a while. We’re excited about our work towards a pilot implementation of xRapid, which uses XRP in payment flows.”

Ripple making Wave
The Ripple brand and its coin (XRP) has been connected with quite a number of financial institutions since 2017.  In November,  Axis Bank, which is one of India’s largest private sector banks unveiled an instant payment system in partnership with Ripple.
Also, MoneyGram – the world’s second-largest money transfer firm inked a partnership deal with Ripple in January that will enable MoneyGram to integrate Ripple’s xRapid network into its internal processes.
That’s not all, on February 10, Ripple announced its strategic partnership with UAE Exchange, a leading global money transfer, foreign exchange and payment solutions brand. This deal would allow the exchange send cross-border payments seamlessly.
Ripple is steadily gaining popularity in the cryptocurrency space especially with banks and other Fintech companies.
In the near future the Ripple brand and its cryptocurrency (XRP) will be a huge force to reckon with in the crypto and blockchain world.