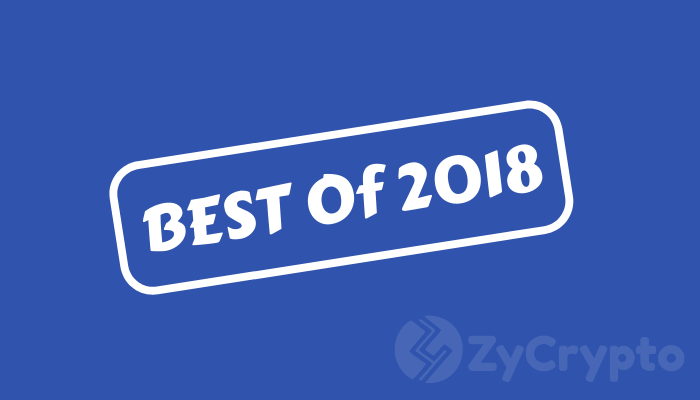 The year 2018 was pretty rough for the cryptocurrency industry characterized by price crash and immense volatility. The year ended with the biggest crash in the history of the industry with the lead cryptocurrency Bitcoin losing ~80% of its value in the fourth quarter of the year.

However, in the face of the crash, some of the cryptocurrencies have performed relatively well. In this article, we discuss these top performing assets with respect to the others. These assets are:

Cardano, a foremost platform for smart contracts like Ethereum happens to be one of the top performing cryptocurrencies this year. It is a platform that offers scalability and security through its layered architecture. It is considered a third generation blockchain platform by its creator Charles Hoskinson.

Perhaps it is Cardano’s uniqueness and value addition that is responsible for its performance in the year. Although it has had its fair share of the price decline, the asset has also seen significant price gains. It got to the peak price of $1.15 in January before experiencing the general market decline, dipping to as low as $0.15 before surging another high of $0.37. Although it has been on a free fall since then to reach its current price of $0.04, Cardano is definitely one of the assets with the highest gains in the year. In addition, it has been predicted to go high by 2019.

This is an interesting cryptocurrency that happens to be the first open-source distributed ledger. It is also a fee-less platform that provides solutions to the ledger problem of central control among financial institutions around the world.

IOTA started the year 2018 with a high price of over $4 but crashed to ~$1 as the year progressed and the crash came into force. It was however among the top gainers in the brief recovery experienced in the market last week hanging in the green when all other cryptocurrencies among the top ten were in the red. Like Cardano, it is foretold to bounce back to $5 which it last recorded in 2017 because of its high demand in the IoT and business community.

XRP the payment cryptocurrency and second largest cryptocurrency by market capitalization have seen quite a wonderful year despite the lingering crash. XRP recorded its incredible price of $3.65 in January 2018. Although the year later brought a decline in the industry, XRP still experienced some important price gains. Its biggest achievement, however, was the taking of the second spot from Ethereum during the year.  one of which is the surge following

Its mass adoption for payments by hundreds of clients worldwide has significantly increased the value of the asset starting with the one following the launch of xRapid which is leading the payment revolution that is based on XRP. the asset also closed the year with another price surge. XRP is expected to lead the massive year of cryptocurrencies in 2019.

Among the privacy coins, Dash appears to be a top performing one in 2018. At the beginning of the year, it started at a really high price of over $1,000 but has seen a sharp decline since then to the current price of ~$80.

Dash provides instant and private payment solutions that help merchants around the world to make seamless payments. Its massive adoption in the South American country of Venezuela is its major achievement in the year with over half of all merchants accepting Dash in the world using it in the country.

This is another cryptocurrency that had a great start in the year. Like many others, it has suffered at the hand of the bears falling to under $1 from the opening price of up to $34. Like Dash, Its design for speed and efficiency coupled with zero-fee transactions makes it a favorite for micropayments, giving it wide adoption among merchants around the world.

Maker has also had a relatively good time in spite of the rough market. Although it has crashed like most other assets, it started the year well with the highest price for the year. Somewhere in October, the asset experienced a price surge to $780 when Auger (REP) agreed to add Maker stablecoin DAI to its exchange before crashing to the current price of $450.

XLM is an asset that has made significant progress this year. One of its major feats was the replacement of Bitcoin Cash (BCH) in the 4th spot by market capitalization during the crash. Stellar also had one of the biggest airdrops in the history of cryptocurrencies distributing $25,000,000 in XLM. The asset also has a bright future in 2019 as it is expected to experience a big surge in the year.

This cryptocurrency needs no introduction if not for anything because the CEO of its mother company Tron, Justin Sun, has been very vocal about its achievements. First, the asset has seen mass adoption as a token for many services in gaming and providing a decentralized platform for internet users.

Tron launched its virtual machine in the year which has made it a powerful force in the smart contracts and dapp industry, making TRX the main token for these transactions. TRX is also expected to lead in the 2019 year of cryptocurrency as it was a top gainer during all the intermittent recoveries during the bear market.

Being the main crypto token for the smart contract platform Ethereum, ETH has also done well in 2018 despite the lingering crash. It has seen significant appreciation since the November bear market. ETH has appreciated from ~80 to a current price of $133. It went up to $150 at some point despite the fact that Bitcoin (BTC) has been struggling to maintain a $3,900 price.

The asset is also gathering momentum which is showing in its market cap that is likely to reach and possibly surpass that of XRP. this means ETH may reclaim its 2nd position on the list.

The main Binance exchange token BNB has been a strong force during the bear market. It managed to hold its $4.52 price for some time before it was overpowered by the bears. The CEO of Binance has also pointed out significant achievements of the asset for the year. BNB is also expected to do more in 2019.

Over 3,000 Smart Contracts Waiting To Be Deployed On Cardano As Hoskinson Reveals Bullish Trajectory