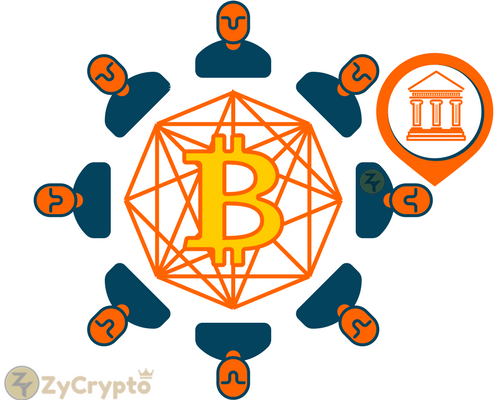 The global financial system has been pretty much the same since the last century, with banks and financial institutions in tandem with the national governments of different countries holding the key to each and every transaction which occurs between two or more parties in any part of the world.
To counter this well-established system which imposes their own charges and acts a middleman, the blockchain along with Bitcoin was first developed by an anonymous individual in the year 2009.
While Bitcoin was the token which allows people to transact freely without the hassles and the fees associated with fiat, or traditional, currency, blockchain is the underlying network which allows these transactions to take place in a secured yet decentralized environment which is free of any influence.
The popularity Bitcoin and blockchain have received over the past year has made financial behemoths quite uncomfortable, as can be evidenced by their statements. From JP Morgan to Goldman Sachs, top companies have spoken bitterly about cryptocurrencies in general, calling them to be a fad and even vehicles for conducting anti-social activities such as fraud.
But several surveys have found out that financial companies are looking hard and are experimenting with blockchain as multiple forums, including the World Economic Forum, has stressed heavily on the fact that blockchain has the potential to transform the traditional banking system and make it more efficient and cost effective.
Currently, banking and other financial services comprise of an industry which is worth more than $134 trillion globally and has healthy growth year on year. But the blockchain seeks to disrupt this industry by making use of technology. Blockchain would change several aspects of the financial industry, including

Payments – In the traditional banking system, trillions of dollars of capital flow through per day using a system which has not changed much in the last 100 years. This system is slow, inefficient and has significant overheads, which is passed on to the parties conducting and receiving the payments.
In addition, hidden costs as well as costs for currency conversion are also imposed on the parties, while banks make money by acting as middlemen. The time taken for a payment is not instant, and can take anywhere from 24 hours to even a week.
Blockchain would revolutionize all of this as it presents a clear record of fees and charges which would ensure peace of mind and clarity between the parties when a payment is made. It also allows for fast and effortless disbursal, with processing times not exceeding minutes and usually taking seconds.
Securities – Today’s financial markets maintain a record of assets using a complex system of brokers, which leads to delay in the transfer of data and funds as well as hinders efficiency, in turn leading to raised costs for everyone involved.
Blockchain, due to its inherent interconnected nature, would cut down the requirement of brokers as well as allow for rapid transfer of data and funds due to the fact that all data is located in a single shared ledger which is accessible to all at once.
Fundraising – Traditionally, money has been raised through venture funding, which is provided in return of shares or kind. The blockchain would be a boon in this aspect too, as it would allow anyone to raise money from anyone without meetings or stakes.
No negotiation would be needed, as interested parties may invest in projects which they find interesting. Blockchain also allows capital to be raised in the form of ICOs or Initial Coin Offerings, where tokens are exchanged for real cash. These tokens increase or decrease in value according to their demand in the cryptocurrency market.
Loans – Banks and financial institutions use an inaccurate way of disbursing loans to individuals and other organizations. They often use out of date data and are hostile to their consumers as well as try to negatively impact their ability to get a loan.
The blockchain would provide a tamper free data system to track records of customers and provide an impartial way to disburse loans with regards to their history without any prejudice. It would also help in protecting users’ data from hacks and leaks.
Clearance and Settlement Systems – The traditional financial system, built on old technologies, also takes time to settle a transaction between two or more parties. The general time for transactions is usually 3 days, which, while sufficient for the time when the system was first introduced decades ago, is woefully inadequate for today’s time, where information moves in a matter of seconds.
The delay causes significant time as well as efficiency losses, which in turn leads to higher fees. Blockchain would be a great solution to this logistical nightmare, as banks, irrespective of their location would be based on a same network and would have a shared ledger which would boost settlement systems and even allow for rapid clearing of funds from one bank to another, increasing efficiency in the process.
The blockchain industry, while promising, is still in its infancy. Certain aspects of this futuristic technology still needs to be polished and perfected. The technology has got a large numbers of diehard followers as well as a significant numbers of naysayers.
While its proponents believe it will replace the traditional financial system, its detractors believe it to be a fad. Overall, it is an exciting technology and it remains to be seen how and when it changes the market for good.