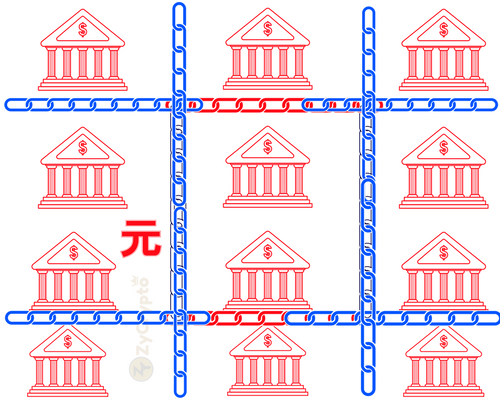 The rise of blockchain technology has instigated a lot of reforms across various industries in China. Despite the fact that China has ban Cryptocurrency trading and ICOs, developers are still introducing innovative Blockchain projects.
A report from CEBNet, a Chinese financial news source, revealed that 2017 was the year when many public banks deployed the technology to improve their services.
Remarkably, a dozen, nearly half of the 26 banks publicly listed in China and covered in the annual report implemented blockchain technology with very different objectives that contributed to Stellar growth in the number of banking operations.
The 12 financial institutions include – Bank of China, Construction Bank of China, Agriculture Bank of China, China Merchant Bank, Guiyang Bank, the famous Sanjiacheng City Commercial Bank and five other national joint-stock banks.
While a majority of blockchain application for the listed banks were for cross-border business and billing services, it also spanned across safe-keeping of loan information and user identity.
China Construction Bank, for instance, processed transactions that worth a total of 1.6 billion yuan, ($251m) using a newly launched blockchain application that provides cross-border loan issuance service to start-ups and small businesses.
The Bank of China reportedly has completed a testing phase for distributed IT infrastructure to be deployed across the various branches in the country. The goal is to boost the development of new blockchain based digital wallets for bank customers.
The Agriculture Bank of China, on the one hand, has built a blockchain based network that offers unsecured loans for agricultural e-commerce merchants on the principle of automatic issuance of a loan to compliant individuals on the network.

Will 2018 be the big Blockchain year in China?

It has already reported that state-owned banks are currently exploring ways to implement Blockchain Technology in solving data storage issues and also streamline the process of certificate authentication.
With the first quarter of 2018 gone, there are reasons to believe that new applications for blockchain technology will be discovered, tested and implemented to further secure banking processes in the Chinese Fintech industry.