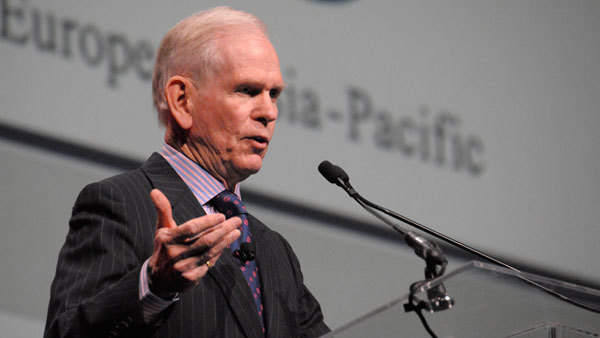 There is no wonderful creation of man that has no haters and doomsayers. Bitcoin has flourished in recent times, hitting new all-time-highs and making new friends as well as haters.
The co-founder of the GMO investment management, Jeremy Grantham, who is famous for predicting the stock market crashes of 2000 and 2007, has said Bitcoin is a bubble and will crash within 6 months to two years time.
Here Comes Another Bitcoin Doomsday Predictor
Jeremy Grantham is the man who saw tomorrow!. He successfully predicted that the stock market would crash in 2000 and 2007 and it came to pass. The CEO, in his recent report, has said that the Stock market and Bitcoin are both bubbles. In his words:

“Having no clear fundamental value and largely unregulated markets, coupled with a storyline conducive to delusions of grandeur, makes [Bitcoin] more than anything we can find in the history books the very essence of a bubble. Anyone around in 1999 and early 2000 has had an early primer on these signs.”

Bitcoin which traded below $1000 in 2016, has seen an exponential rise in price since early 2017 when it first reached the $1,000 price area and continued going bullish until it kissed the $20,000 price region in late 2017. Although at press time, the price of bitcoin is at $14,645, Bitcoin investors who bought Bitcoin in 2017, have gotten an ROI of over 1000%, as it stands.
This explosive growth of the world’s flagship cryptocurrency has made financial analyst, and Bitcoin sceptics say it’s a bubble.
Grantham has compared the explosive rise of bitcoin to the Tulip Mania bubbles of the 17th century.
He further said that:

“I recognise on one hand that this is one of the highest-priced markets in US history, on the other hand, as a historian of the great equity bubbles, I also recognise that we are currently showing signs of the blow-off or melt-up phase of this very long bull market.”

The analyst believes that the world markets, including bitcoin, will soon crash. He noted that once market talks are always in the news, “just as late 1999 featured Pets.com – we are probably down to the last few months. Good luck. We’ll all need some.” He ends it.
Faith In Bitcoin
While many sceptics and haters are busy predicting the burst of the bitcoin bubble, the CBOE and CME Group  launched bitcoin futures contracts. Many other institutional investors also applied for Bitcoin ETF licenses. The cryptocurrency market is poised to revolutionise the world, with many viable ICO projects springing up with each passing day and Bitcoin continues reaching new all-time-highs.
Just as the Bitcoin sceptics are predicting the fall of the crypto giant, so also are bitcoin investors like the Winklevoss twins, Jeffrey Kleintop and many more, anticipating the Bitcoin price to reach the moon soon finally and will go on to become the undisputed digital gold of the world.
It is okay if some believe Bitcoin is a bubble, maybe someday they’ll think differently.