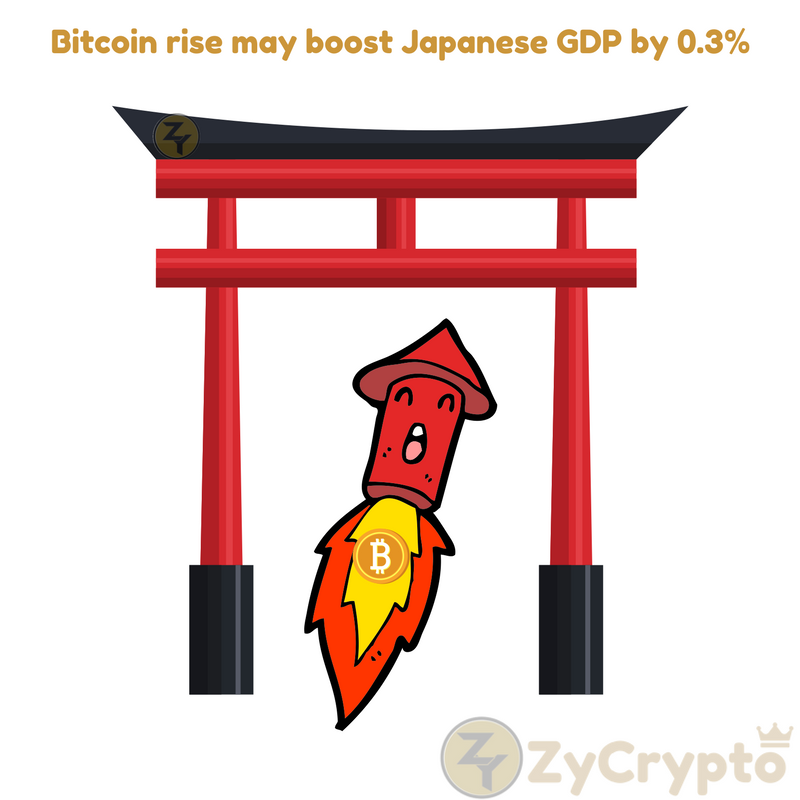 Analysts from Japanese company Nomura predict that the Bitcoin boom will boost Japan’s Gross Domestic Product (GDP) by 0.3%.
The two analysts Yoshiyuki Suimon and Kazuki Miyamoto, from Nomura, said on Friday that the Bitcoin boom may boost Japan’s GDP by 0.3% because of the ‘wealth effect’ that it creates.
The ‘wealth effect’ involves people buying more products when they feel like they have enough assets to do so. People may buy more items when they have more Bitcoin holdings because they may feel more financially secure and free to spend more loosely.
Suimon and Miyamoto created a report, released on Friday, that predicts Japanese consumer spending to rise from ¥23.2 billion to ¥96.0 billion, which is equivalent to $206.7 million to $855.4 million.
The report outlines that concentrated rises of Bitcoin in the 4th quarter of 2017 may spill over into the 1st quarter of 2018, creating a rise of 0.3% in GDP on a quarter-on-quarter basis.
The finance site CryptoCompare lists the Japanese Yen as of trading half or more of the trading volume of digital currencies. The site also lists America as the second share of trading volume and notes that America was first place for a few weeks at the end of 2017.
Haruhiko Kuroda, Bank of Japan Governor, suggested in December 2017 that the Bitcoin rise may be due to speculation of the coin. The financial sector has introduced new methods to speculate on Bitcoin over the year 2017. This coincides with a growing number of cryptocurrency platforms that allow for speculation.
The wealth effect also occurred on the lead up to the 2008 financial crisis because consumers felt more confident to buy products due to their perceived mortgage security. A ‘wealth effect’ is therefore not necessarily a positive sign and could even spell trouble for the Bitcoin market.