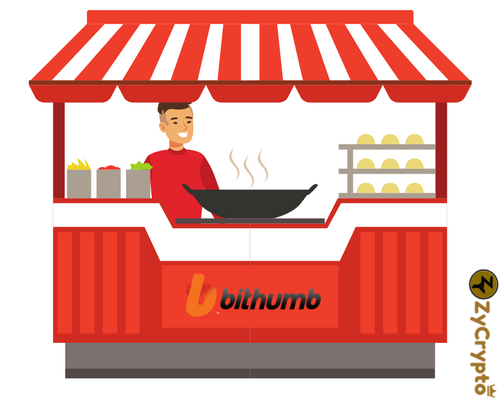 The world is fast approaching the era of a completely cashless society. But more interesting is that food lovers can conveniently eat without worrying about cash to pay in South Korea as Bithumb has lifted that burden with their latest innovation.

The tiny peninsula nation of South Korea is no stranger to the kiosk machine; however, Bithumb a Korean Cryptocurrency exchange giant took it a top-notch higher by introducing a kiosk under the “TouchB” brand that carries out three functions at the same time.
The kiosk is created in such a way that people can view food menus, make their orders, and pay for their orders all at the same time,
“Bithumb has agreed to supply kiosks to food and beverage franchise, small restaurants, and cafes under the brand Touch B, in partnership with kiosk manufacturers”, remarked Yonhap. Describing the kiosk as a machine that can take orders and payment providing sufficient information to users.
Bithumb collaborated with companies like Unos Pay, Tros Systems and I’m U to supply these kiosks at a fee that is 10% below the industry rate for a kiosk.
“The entry into the kiosk business is meaningful to provide substantial benefits and low-cost rent to small business owners” according to Bithumb.

It seems South Korean addiction to Cryptocurrency cannot be cured as various inventions that promote the use of the bitcoin and other cryptocurrencies springs up every day.
The Korean society is one of the societies where Cryptocurrency is largely accepted as almost everyone actively trades in Cryptocurrency including housewives and youths.
No wonder the Bithumb kiosk accepts Cryptocurrency as one of its means of payment not only the country’s currency.
The major aim of this idea is to promote the widespread of the use of Cryptocurrency in the society.
“We will continue to work in various industries based on the Blockchain technology, to provide total solutions for small business through our partnership” the publication further stated.
The Exchange believes that the synergy needed amongst its offering will be created by the kiosk business.
Bithumb deserves nothing less than applause; we can only but hope that the desired effect will be achieved in a not too far future for them.