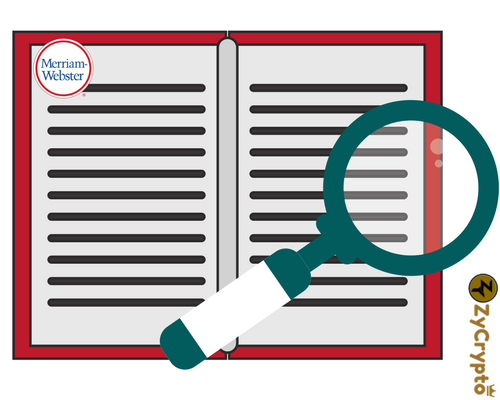 “The language doesn’t take a vacation, and neither does the dictionary. The words we use are constantly changing in big ways and small, and we’re here to record those changes. Each word has taken its own path in its own time to become part of our language – to be used frequently enough by some in order to be placed in a reference for all.
if you’re likely to encounter a word in the wild, whether in the news, a restaurant menu, a tech update or a Twitter meme, that word belongs in the dictionary.”

Emily Brewster, an associate editor at Merriam Webster, reiterated that:

The Merriam Webster dictionary defines Cryptocurrency www.merriam-webster.com/dictionary/cryptocurrency  as any form of currency that only exists digitally, that usually has no central issuing or regulating authority but instead uses a decentralized system to record transactions and manage the issuance of new units, and that relies on cryptography to prevent counterfeiting and fraudulent transactions.
Blockchain noun: a digital database containing information (such as records of financial transactions) that can be simultaneously used and shared within a large decentralized, publicly accessible network; also: the technology used to create such a database.
ICO: an initial offering of a cryptocurrency to the public.
Bitcoin, the world’s number one cryptocurrency was added to the dictionary in April 2016. The popular “HODL” is yet to be made an official term but with the way things are going, it definitely would get in there soon enough.