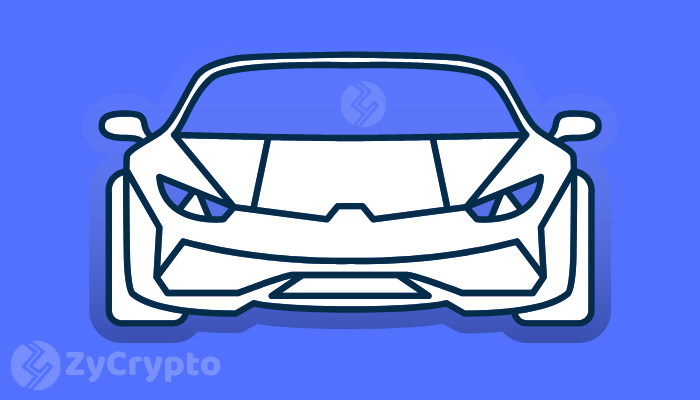 The Lamborghini has for a long time been an emblem of wealth amongst cryptocurrency investors. The Italian brand  luxury car is highly symbolic to crypto investors who are on the verge of cashing out.
While investors urge themselves to “HODL” in order to acquire enough cryptocurrency and make valuable returns, cashing out to buy a Lamborghini is the only exception to this case which is largely endorsed in the cryptocurrency space.

THE SIGNIFICANCE OF THE LAMBO TRADITION

In February 2018, the internet was taken by storm when 35 year old Peter Saddington, an early cryptocurrency investor purchased a $200,000 worth Lamborghini Huracan with 45 Bitcoin. Saddington who invested in Bitcoin back in 2011, in the early years of Bitcoin had purchased all 45 btc less than $115.
In December when Bitcoin price peaked, each of Saddington’s Bitcoin was worth $19,000. Revealing that he had been a “HODLER” for eight years, he urged fellow investors to do the same.
When a new coin is launched, investors begin with skepticism due to the possibility of illegitimacy on the value of the cryptocurrency coin. The Lambo tradition however, signifies the height of a bullish outburst ; when the value of a coin skyrockets higher than its initial worth, enabling the investors to cash out in large amounts.
ETHEREUM FOUNDER IS NOT A FAN OF THE LAMBO TRADITION
“When Lambo”, a commonly used term in the cryptocurrency space has quite an in depth impact amongst cryptocurrency investors than most people probably know. The term attempts to predict when the cryptocurrency markets reaches a bearish milestone to enable coin holders purchase a Lamborghini.
While cryptocurrency investors continue to hold strong to the Lambo tradition, the founder of Ethereum, Vitalik Buterin expressed his disapproval over the trend back in 2017 when a viral meme painting Buterin as a religious leader, stretching his arms forward with a Lamborghini in his hands ; a symbol which is meant to further promote approval. Responding to the meme via Twitter, Buterin said ;
“If all that we accomplish is lambo memes and immature puns about “sharting”, then I WILL leave. Though I still have a lot of hope that the community can steer in the right direction.”
A few cryptocurrency investors have recognized that there is indeed no inherent value in purchasing a Lamborghini. However, the intent behind the act remains one of great significance to cryptocurrency investors.