Cryptocurrencies are inherently volatile, but that volatility has become increasingly pronounced as Q3 gets underway thereby subjecting traders to a wide range of conflicting emotions.

The first few days of July also saw Bitcoin breaking out to touch a new high of $13,110 thereby returning optimism to the market. Many people became quite confident about the bullish trajectory of the market and there were vocal predictions that Bitcoin was set to rally all the way to the 2017-high of $20,000. 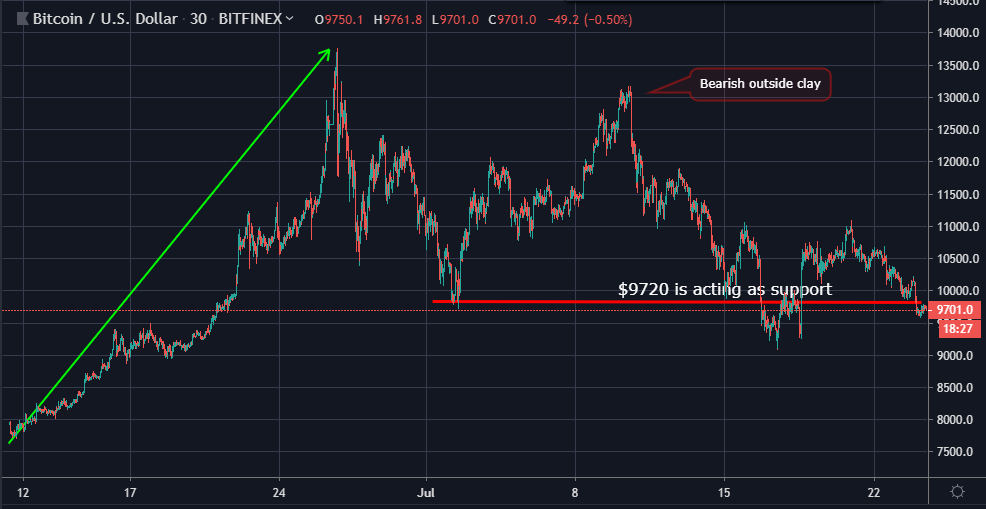 However, July has also revealed the predictably unpredictable nature of the cryptocurrency market. Bitcoin slumped from its $13,200 high to test $9720 (see chart above). The increasing volatility, however, makes cryptocurrencies more attractive to short-term traders with exposures to Bitcoin CFDs, futures, and margin trades. This piece examines some of the socio-political concerns exerting volatility pressure on cryptocurrencies.

Regulators are forcing Bitcoin to become correlated with politics

Bitcoin is not correlated to Wall Street and its performance is often immune from the volatility that traditional assets such as equities suffer because of events in Washington. It appears that the narrative is changing, and cryptocurrencies are about to become correlated with political events for the following reasons;

U.S Federal Reserve chairman, Jerome Powell has revealed that Facebook’s Libra “cannot go forward” until the social medial giant addresses some “serious concerns”. Powell made this assertion during his semi-annual testimony on monetary policy before the U.S. House of Representatives Financial Services Committee.

He noted that “Libra raises many serious concerns regarding privacy, money laundering, consumer protection, and financial stability,” with a “potentially systemic scale” on the global geopolitical and socio-economic arena. He also notes that regulators will be taking their time to examine the potential operation and effects of Libra and “the process of addressing these concerns should be a patient and careful one, not a sprint.”

It is important to note that traders and investors in the U.S. represent about 26% of Bitcoin activity. A cautiously hostile posturing from Wall Street is not particularly good news for the cryptocurrency market and it would be interesting to see how the market reacts to the potentially rising regulation in the long term.

The European Central Bank (ECB) has also expressed concerns about the disruptive potential of cryptocurrencies especially now that Facebook is stepping in to facilitate the mass-market adoption of money existing outside the control of the government and its agencies.

Christine Lagarde while speaking with CNBC in April maintained that Blockchain technology and cryptocurrencies are “clearly shaking the system”. She then goes on to say that “we don’t want to shake the system so much that we would lose the stability that is needed.”

Last month, news broke that the Indian government has drafted a bill called “Banning of Cryptocurrencies and Regulation of Official Digital Currencies Bill 2019″ to regulate cryptocurrencies. Feelers from the Indian Department of Economic Affairs suggests that many of the government officials are keen to impose a ban on the issuance, purchase, and trading of cryptocurrencies in India.

What does the rest of 2019 hold for cryptocurrencies?

The move by Facebook to develop Libra has validated the idea that decentralized money might be the key to unlocking global prosperity at scale. Hence, even though regulators don’t seem particularly happy with Facebook, the proverbial Pandora’s Box about the disruptive nature of cryptocurrencies has been opened.

The short-term might still be filled with lots of intense volatility but the general sentiment is that the general direction of Bitcoin is northbound. In the words of Marcus Swanepoel, CEO of Luno, “it is important to recognise that over the last few months the underlying trend, as the future utility value of the coins becomes clear, is positive.”

However, the volatility of the market is likely to remain pronounced as the bears and bull continue to wrestle for the soul of the market. The fact that whales are still able to influence the market also suggests that it won’t be unthinkable to see Bitcoin take two steps forward, four steps backward and then another seven steps forward.