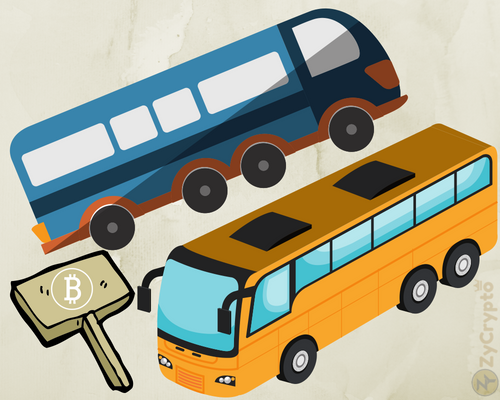 Two companies, Viação Garcia and Brasil Sul, that are part of the GSB group have just became the first passenger transport companies in Brazil to accept cryptocurrencies as a payment method.
Last Thursday, the sale of tickets online via cryptocurrency was started. In the country, they will be the first passenger transport companies to accept this digital system of decentralized payment. The group opted initially to use Bitcoins and, according to the direction, two additional cryptocurrencies will be accepted by July: Bitcoin Cash and Litecoin.

“Cryptocurrencies represent changes in financial relations. Facilitate online shopping. Many of the economic and commercial operations are migrating to the digital world and in the segment of road passenger transport could not be different,“ says GSB Group vice president Estefano Boiko Junior.
In addition, he says, “Still there are few people who use this virtual currency system, but we are implementing this innovation, which will bring another alternative to our customers and is what we are always looking for, like when we started selling tickets online in 2005. At the time we were also pioneers in the country.“

These transportations companies offer regular urban and suburban transport services, trips among cities as well as private trips for schools, clubs, companies and excursions. The method for purchasing tickets and reservations with bitcoins is the same as for online credit card purchases, but using the appropriate address from your personal bitcoin wallet.
Customers will open their crypto wallets and scan the code that appears on the payment section, in the transport company website. This new payment method is available through online reservation only and the voucher will be sent to customer’s email for payment confirmation.
Brazil was one of the Latin American countries where a conflict between cryptocurrency exchange agencies and traditional banks recently occurred. However, the growing popularity of digital currencies has prompted traders and service providers to incorporate them into their business activities.
The passenger transport sector could be one of the most compatible with cryptocurrency. On the other side of the world, an initiative called Brisk Pass is already underway in Germany to develop a global public transport transaction system based on blockchain and with a built-in crypto wallet.
The use of cryptocurrencies and distributed accounting technology can definitely represent a great opportunity for the passenger transport sector, as it is a decentralized system, resulting in lower costs for users and service providers.