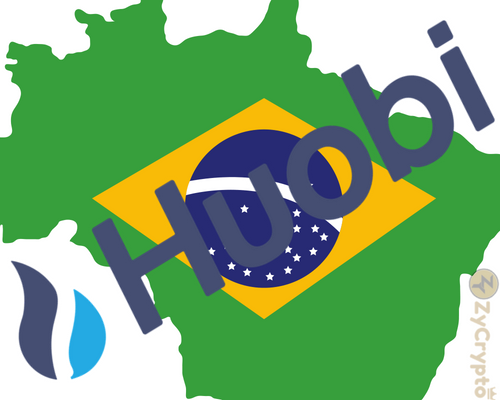 At a time when various governments and regulatory authorities are formulating somewhat harsh laws for their crypto space, virtual currency related businesses are not ready to watch their trade get stifled by unfavorable laws, as such there have been quite many migration plans by cryptocurrency exchanges this year.
According to reports, the third largest cryptocurrency exchange in the world, by 24-hour market volume, Huobi has opened an office in Sao Paulo, Brazil and is now promoting its platform and making plans to hire staff in the region.
Per local news source Portal do Bitcoin , official of the exchange were present at a recent blockchain and cryptocurrency event at VI Bitconf, where they gave out complementary cards and other promotional materials to attendees.
Portal do Bitcoin also claimed that Huobi has been communicating with crypto big whales in the Brazilian market and its expected that the exchange would commence operations before the end of 2018.
From all indications, Huobi’s move abroad is not fueled by draconian regulations as the Singaporean authorities have been making efforts to formulate amenable laws to govern the nascent crypto ecosystem.
On May 24, the Monetary Authority of Singapore(MAS) which is the country’s central bank, hinted that its making efforts to update the existing guidelines governing financial exchanges, as times have changed and decentralized exchanges have to be brought into the picture. An excerpt from the report reads:

“recognized market operators”(RMO) system fails to keep up with the newfound demands, in particular, new businesses modeled on “emerging technologies,” MAS stated, adding “As the current RMO regime has been in place since 2002, it is timely to review the regulatory framework for the market operators to ensure that it continues to meet the demands of the changing landscape.”

However, Huobi’s move to Brazil may turn out to be a great move in the right direction as Brazilians have since caught the bitcoin fever despite warnings from the government.
While the exchange is already a significant player in the blockchain-based digital currency ecosystem, the team is still hungry for more glory.
Recently it opened shop in crypto-friendly Canada to take advantage of the vibrant cryptospace of the nation.
“Establishing Huobi’s first Canadian offices in Toronto is a continued effort to help the blockchain industry become more credible so that mass adoption can come sooner,” said general manager for Huobi Canada, Ross Zhang.