Justin Sun is tweeting again, and this time around, he’s almost bragging about something that could potentially upset the TRX market in a really nice way. Anyone who has been following Justin’s tweets knows about the recent events happening around Tron’s TRONbet.
Justin even tweeted and broke the news that over 70 million TRX had been won by users on TRONbet. However, it’s his latest tweets that have people taking even more serious notice.
In a tweet, Justin said that Tron was now ahead of Ethereum in terms of daily transactions, something that’s actually true. Despite TRX being the world’s number 11 cryptocurrency, the company, Tron, has been burning the midnight oil trying to make things better and smoother for the token.
A few weeks ago, the Tron Virtual Machine (TVM) went live. The Tron network was also migrated from its old ERC20-based system to Tron’s own MainNet. Evidently, those have been quite some nice steps for Tron in the right direction. That’s what got it here. 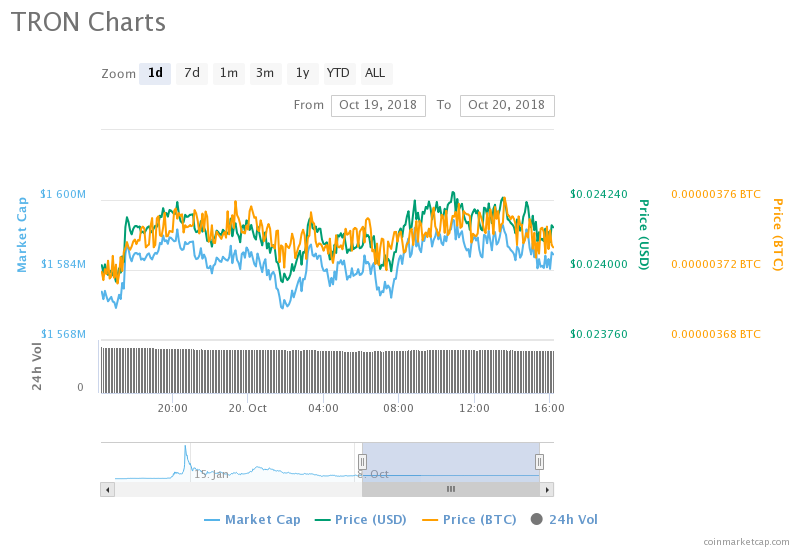 According to Justin’s tweet, Tron was handling about 599,354 transactions on October 18th as compared to Ethereum’s 565,791. From the figures, it’s pretty clear that TRX was ahead of ETH, albeit by a relatively small margin. Justin went on to say that the development was just the beginning, signaling his obviously great optimist in the future of TRX.
However, Justin’s tweet and the news didn’t seem to convince some people on his thread. Some people said that this was just a passing wind and that ETH would soon reclaim its glory. Someone on the same thread noted that the spike on Tron’s transactions was as a result of the numerous gaming transactions happening on TRONbet.
Another twitter user expressed optimism on the future of TRX, saying that the planned launch of Tron’s Project Atlas could be the real market game-changer for the crypto. Someone even suggested a coin burn to reduce TRX supply and force the price up.
All in all, it still remains to be seen whether TRX will actually sustain the assault on ETH. From a prospective point of view, it’s safe to opine that TRX could improve its market position and possibly get its price bounced up if it sustains its new position ahead of ETH. Could the bulls of TRX be preparing for a run?