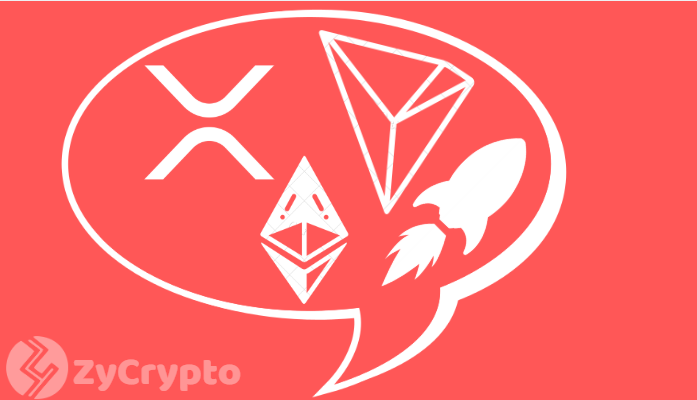 The cryptocurrency market these past few months has been nothing good to write home about. However, despite the constant backsliding of many digital coins, some were making waves amidst massive turn of events in the various ecosystems and communities which investors are looking forward to it impacting their rise on the crypto chart.
This piece gives a little insight to the most talked about coins of September this year, and why investors and crypto fanatics were so hyped about them.

After a fantastic debut year, Ripple (XRP) was tipped to rival the top coins in the crypto market with some even labelling it the next Bitcoin. With historical feats such as surging 33% a day, in the latter stages of December last year, investors predicted everything but failure for the digital coin.
Things however took a sour turn as the coin’s performance started to drop and hasn’t been of any exception this year. The currency, however, pulled one of its rapid rises in September, gaining almost 50% in the space of 24 hours, rising above $0.50 for the first time in 4 months.
This surge was mainly due to its then highly anticipated new product, xRapid, which has was launched a few days ago.  The xRapid is designed to assist banks in speeding up transactions using the XRP. These events which unfolded turned the somewhat forgotten coin, into a hot cake with investors now keeping a closer eye on the digital currency.

Tron (TRX) in September was the main topic of many discussions in the crypto world, especially in the entertainment industry, not because of its price neither its performance, but its projected future. After seeing a 59% drop in its value within just 90 trading days, together with its poor performance on the crypto chart,  it looked like the digital coin had hit rock bottom.
Many announcements from the team behind Tron, threw the digital coin into a frenzied state. Tron in September, announced many ongoing developments, including plans of releasing its first-ever Tron-based game in the world, powered by BitGuild. This move brought so much hype as the entertainment industry was thrown into a state of anxiety as to when the project was going t be released.

Arguably the second biggest coin to Bitcoin, Ethereum has had its fair share of popularity and fun rides on the crypto chart. The digital currency was also the center of most conversation in the crypto market, on how its grip on the second place on the crypto market is gradually loosening by the day.
The digital coin has been plagued by network problems this year, a basic problem which almost turn the digital coin into a laughing stock, in addition to huge ICO’s dumping their ETH holdings into the market to make capital to support their various business ventures. With Ripple almost taking the crown as the second biggest cryptocurrency, the debate on whether that is correct or not further put the coin into many headlines.

With Stellar teasing investors with its date for the launch of its StellarX exchange, the crypto world got stuck on it. Many experts had predicted that the price of Stellar to hit $1 before the end of the year, and investors saw this launch as the key to that happening.
Stellar (XLM) is the native token for the StellarX exchange, and that was expected to play a pivotal role in higher trading volumes which could drive the price to $1. The digital coin also started getting interests from banks, because of its potential price stabilization, a trigger which could send the coin on a bullish price movement for handling cross-border payments on the blockchain, which also favored the adoption of the digital coin.