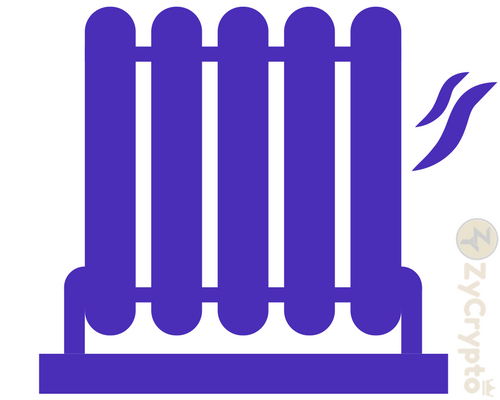 The need for heat has been in existence way back before civilization. Men have always looked for various means to get hot air in order to weld the cold off.
The heating systems of today can be traced back to the ideas and designs of the past. Thanks to the forward thinkers of our time, effective heat is only as far away as the air we breathe.
At the crux of this invention is the Qarnot Cryptocurrency Heater.

According to TechCrunch, a French company known as Qarnot has introduced a Cryptocurrency  Heating device that is capable of mining digital currencies and heating your room up at the same time.
The QC1 which is an acronym for the device is a heater that contains a passive computer inside that can be used for mining.
The journey started since 2010 for Qarnot, building various products that fuse multi-CPU high-performance computing servers with electrical heaters. It is afterward sold to companies like real estates, local authorities who have a need for them.
Some companies like BNP PARIBAS, Societe Generale, Air Liquide and Blender usually hire those servers for data crunching purposes, such as 3D rendering and VFX for film studios.
In other words, it can be concluded that Qarnot has built a decentralized data center.
According to Co-founder and COO Miroslav Sviezeny “We provide computing capacity with an extremely hard constraint, which is the heating needs of consumers”.
It would interest you to know that Qarnot has the ability to offload some of the computing to traditional data centers. This would be particularly useful during summer.

The QC1 is fast and efficient; all you need to do to get it started in less than 10 minutes is to plug in an Ethernet cable and then put your Ethereum wallet address in the mobile app.
It is designed to mine Ethers by default due to AMD GPUs (Sapphire Nitro+ Radeon RX580 with 8GB of VRAM) but can also mine some other digital currency.
With the current price of Ethereum, Qarnot says one can be expected to mine around $120 per month (€100) which doesn’t take into account your power usage. All of the Ethereum coin mined belongs to the miner as Qarnot doesn’t take any coin as charges.

Qarnot Cryptocurrency Heater has been designed in a way that allows for the heat to be derived from the GPU and not CPU.  The two GPUs are turned on mine the Ethereum at 60MH/s speed. It also contains traditional heaters for more heat in case of extreme cold.
Qarnot heaters do not depend on any fan or hard drive, it uses passive heating which makes silent and noiseless.
Qarnot is selling this grand innovation directly to end users at the rate of $3,600 (€2,900). It is interesting to know that that Bitcoin is also allowed for payment.
Mining Cryptocurrency is an arms race that’s very rewarding no doubt, the cost of heating is also very high. QC1 however, solves the problem.
Although it might be expensive and considered to be for the influential in the society, we hope this innovative device has come to stay and would pave way for more to be created.