The third largest cryptocurrency by market capitalization XRP seems to be having a bad 2019 as the asset has suffered the worst blows from the market so far. XRP has suffered the greatest loss so far, losing over 13% at one go while other cryptocurrencies in its category gained significantly.

The cryptocurrency has been maintaining a price of $0.3 which is a delicate balance. However, it recently slid below that level which is a rather surprising occurrence, especially in the raging bullish market. 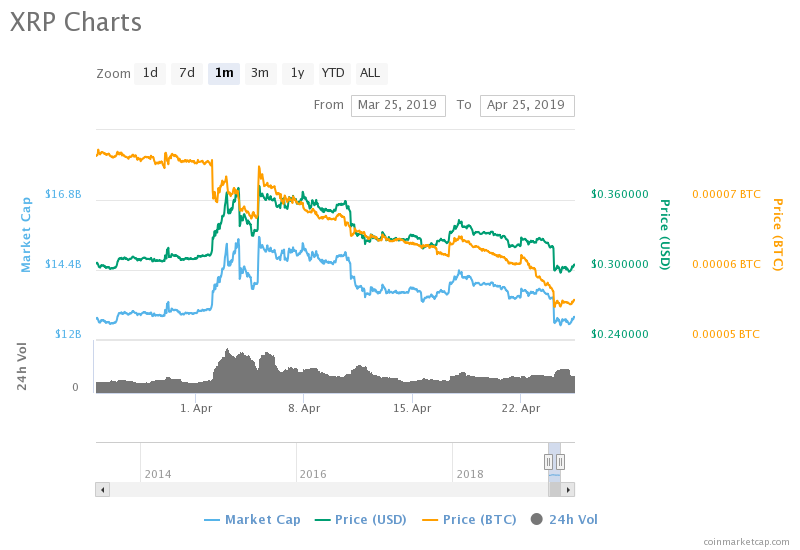 Most of the loss is driven by a reduced interest in Ripple’s payment product xRapid which uses XRP as its token to facilitate payment. The reduced patronage was confirmed by Ripple’s Global Head of Banking Marjan Delatinne in a tweet.

“Due to regulation uncertainty, NO banking institutions are using xRapid as of now, ONLY payment service providers.”

Ripple is currently in court over the status of XRP as a security or a coin and the decision on this case may take a long time to reach. While this is a reason why Ripple clients have withdrawn, it is also unsurprising because of the proliferation of other cryptocurrency projects that are focused on remittance services just like Ripple, such as the JPM Coin and IBM payment platform. This wasn’t expected to be a problem but it appears to be a serious one right now.

Just last week, an analyst gave a wild prediction that XRP would hit $300 after the asset soared to $0.36 in a few hours. This surge, however, has not been sustained and XRP seems to be down where it started.

It has been a trend that many people in the cryptocurrency space seem to support XRP as shown by several Twitter polls. However, this support and popularity are hardly reflecting in the price of XRP as Bitcoin and Ethereum have always been in the lead despite the sometimes obvious preference for other cryptocurrencies.

The year is still early though and XRP could still regain its glory with a price surge. This will depend on the decision of those who use Ripple’s payment technology either to start working with it again or leave it for good. For now, Ripple’s future isn’t looking too positive but the crypto space is unpredictable and this can change anytime soon.