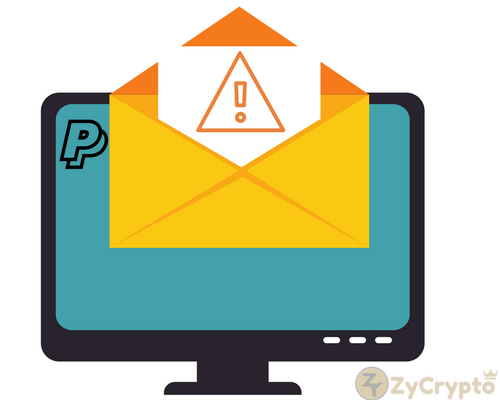 PayPal users across the globe are reporting to have received emails from the company warning them about using PayPal for conducting transactions or trade in digital currencies. Calling such transactions to be against the “Acceptable Use Policy” of PayPal, it further warned users to immediately stop using their service for anything related to cryptocurrency.
One of the users, David Veksler, was very vocal in expressing his displeasure regarding the email received from PayPal. Mr. Veksler is a member of the Foundation for Economic Education as well as the Atlanta Bitcoin Embassy.
Talking to reporters, he said that he was first surprised on the email, with PayPal branding and with the title “Cryptocurrency warning”. Mr Veksler has being using PayPal since the last 17 years.
The 20 year old company, founded by a group which included Elon Musk as well as Peter Thiel, is by far the most prevalent payment company across the globe. Individuals as well as business make use of PayPal for transferring payments from one part of the world to another in a matter of seconds in exchange of goods and services.
With revenues over billions, many people consider cryptocurrencies to be direct rival to PayPal as they aim to improve the way money gets transferred from one corner of the world to another.
The email is surprising, as it has been discovered that PayPal itself had applied for crypto related payments. Many users on reddit as well as other social media websites confirmed about receiving the same email and they are not pleased with the threatening tone to company seeks to use in their email.
Users searched PayPal’s website as well as terms of use for the updated terms of conditions prohibiting cryptocurrency related transactions, but were not able to find anything. Ultimately, on the company’s community page, it was confirmed that the email sent was not by PayPal and could safely be considered as not true.
But users wonder, if the emails were indeed fake, then how the header as well as the email address were from the official website of PayPal. The emails were also signed with a Special ID protocol which belonged to PayPal themselves.
While some say the information was retrieved from hacked databases floating across the internet, others say the email was a deliberate attempt to manipulate cryptocurrency prices.