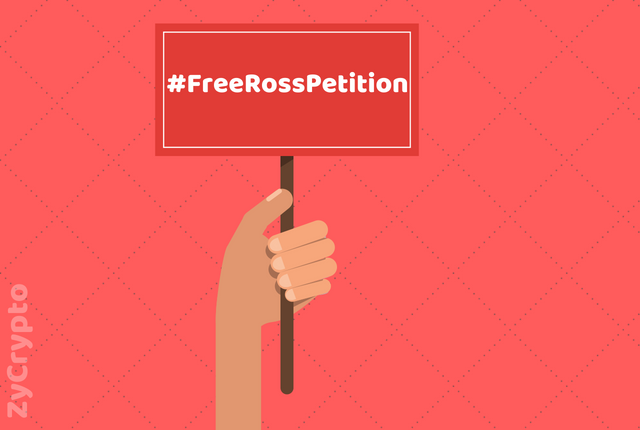 Cryptocurrency bigwigs join the petition for pardon to Ross Ulbricht, as the request gains more strength beyond the crypto world. More than 29,000 signatures have asserted on the petition less than a week it started.
The petition aims as pardon and reduction of jail terms of Ross Ulbricht, sentenced to two life imprisonment with no possibility of parole and other jail terms of 15, 20 and five respectively. The jail terms are considered as a massive injustice for his crimes by the petitioners.

Ross Ulbricht’s Conviction and The Petition

Ross Ulbricht was convicted for money laundering, computer hacking, conspiracy to traffic fraudulent identity documents, and conspiracy to traffic narcotics in February 2015. He is profoundly known for creating and running the Silk Road website, a secret black market where cryptocurrencies are accepted as payments, and also known under a guise as the Dread Pirate Roberts.
Ross Ulbricht was sentenced to two life imprisonment with no possibility of parole and other jail terms of 15, 20 and five respectively. The jail terms are considered as a massive injustice for his crimes by the petitioners, after two attempts of appeal was cancelled by the jury, his alliances resulted to  #FreeRossPetition which was launched on Change.org last week.
The petition which is aimed at granting Ross clemency to his jail terms had gained the attention of the US president for redress in court has seen a vast growth in a few days, with over 29000 signature to the petition.
The petition reads “My son, Ross Ulbricht, is serving a double life sentence plus 40 years, without the possibility of parole, for a website he made when he was 26 years old and passionate about free markets and privacy. Ross―an Eagle Scout, scientist and peaceful entrepreneur―had all non-violent charges and no criminal history.”  It was further described as a petition that shocks the conscience.
In comparison, Ross has been condemned to die in prison, not for dealing drugs himself but for a website which others did as well. This conviction is considered very extreme than the punishment for many murderers, paedophiles, rapists and other violent people.
Giving credence to this petition is cryptocurrency bigwigs and people outside the crypto world. One of the crypto giants that has weighed into the situation is Charlie Lee, who states “that I found out about Bitcoin from an article on Silk Road. Whatever you think of Silk Road, Ross Ulbricht, creator of Silk Road, does not deserve a life sentence w/o the possibility of parole. Please join me to sign the petition,” on his twitter handle.
Erik Voorhees, the CEO of Shapeshift also states,

On his twitter handle. The tweets gain more likes and shares as many seek redress for Ross Ulbricht.
Clemency for Ross Ulbricht would mean justice not only for him and his family but also cryptocurrency. The petitioners hope to get the attention of Donald Trump soon.

Tron’s Justin Sun Had ‘Secret’ Talks With Litecoin’s Charlie Lee. Is a Partnership On The Cards?