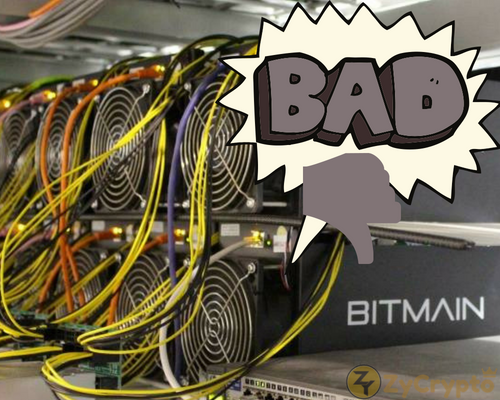 Gaining popularity for the wrong reasons has become a story of Bitmain, a mining hardware equipment company, operating behind the scene of what powers the crypto trading market.
Despite being a popular choice for private and public mining corporations, the agency has come under fire following series of complaints by first batch users of their newly launched AntMiner B3.
There are allegations that the firm employed deceitful marketing tactics regarding the power capability of the product.
According to Bitmain specifications, the equipment AntMiner B3 which exclusively mines BTM, a token of the Bytom Blockchain could compute 750 hashes per second.
The product thus was valued at $2600 roughly 17,000 yuan and sold out 25,000 pieces in a flash sale to the Chinese market on April 25. The shipped products had arrived on May 7.
Just in less than a month, a local news source reported that a group of miners who had received and tested the new machine had gathered in Beijing to protest against Bitmain.
The group cited “misleading consumption, graphics, and mining machines, lack of computing power and refurbished devices” as major deficiencies.
According to results from their initial use of the machines, the maximum computing power was found to be between 500-600 per second, a figure that reduced expected mining profits from a daily 47 BTM to single digits.

While the hardware giants hesitated to give a comment until a meeting with the miners had taken place under police watch on Thursday, it seemed they have conceded to producing a fraction of faulty AntMiner machines.
However, according to the comments on a local news source, the damage isn’t as severe as the miners had claimed.
A Bitmain official said,

For the machines that have problems, I have checked with the internal department several times.
There are less than 100 problems in total (the ant B3 mining machine sold 10,000 units at home and abroad)”

While Bitmain remains open to fixing faulty machines for the miners, it seems the company has no plans to approve refunds to buyers.
Sadly, as long as the saga continues Bitmain may have little success in the Chinese market or potentially lose out to competitors.