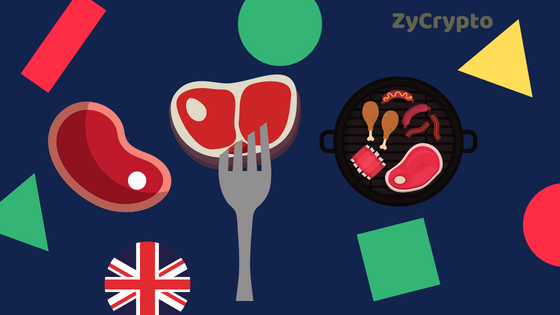 Blockchain technology is set to penetrate a new territory after the UK’s Food Standards Agency (FSA) announced the successful pilot of a blockchain based supply chain monitoring system for meat produced in the food industry.
According to an official press release by the agency, the new trial which was carried out with an unnamed cattle slaughterhouse and a group of farmers yielded “improved transparency” on the supply chain and holds a lot of promise for the future.

Meat On a Blockchain

The standards agency used a slaughterhouse whose “work requires a lot of inspection and collation of results” in order to get the best sets of data while also ensuring that the trial was tracked simultaneously on the blockchain by the FSA and the slaughterhouse.
Head of information management, Sian Thomas says the agency will now count on the government and industry to expand on the blockchain idea.

“Our approach has been to develop data standards with industry that will make theory reality, and I’m delighted that we’ve been able to show that blockchain technology does indeed work in this part of the food industry,” he added.

The next pilot is slated for July and will look to replicate the good result in other plants. This experiment will ensure that all those across the chain get the full benefit of the new way data is managed and accessed by the three nodes on the blockchain – FSA, slaughterhouse, and farmer.
Moreover, if the distributed ledger technology continues to deliver excellent results in subsequent trials, then it could phase out the current data model which is limited to the collection and communication of inspection results.
As Mr. Thomas asserted, “there are great opportunities” locked within blockchain technology and the FSA just found one.
Even though this will be the first time blockchain is used for the meat retail supply chain, the technology is already gaining mileage in the retail industry.
Giants such as Walmart, Alibaba and Cargill have rolled out a number of blockchain based systems for tracking food supplies to customers with many new patents also yet to be approved.