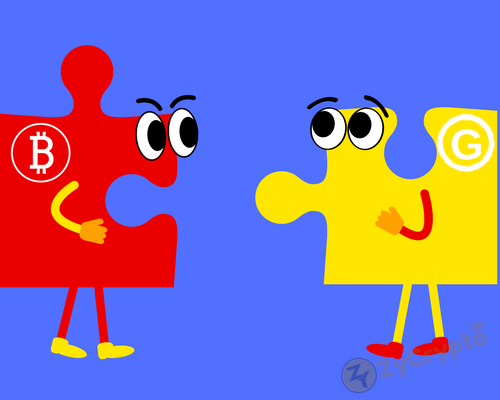 A lot of times Bitcoin has been compared to gold and has been christened as the gold for the digital age. But this correlation has gained significant controversy, as financial experts, as well as cryptocurrency analysts and enthusiasts, are in either of the two camps, which is bitcoin is related to gold or bitcoin is not related to gold, and go at lengths to justify their stance while belittling the other.

While gold and bitcoin have shown indeed shown a correlation during large scale economic crises, with both their prices shooting up exponentially during such events. But unlike gold, whose physical presence as an asset assures investors and which can be sold in the worst times imaginable.

Bitcoin is a digital asset that is not tangible which makes it a bad choice in times of extreme exigencies. The correlation even diverges further once markets return to normalcy.
Many people compare the rise of Bitcoin in 2017 to the rise of gold at the same time. They call the rise of both assets to be interconnected and interrelated to each other. But, the rise in the valuation of Bitcoin was majorly due to market speculation, as people and investors alike poured money to reap benefits of a market that was largely unregulated and free of governmental overreach.

The rise in gold, on the other hand, was due to the fact that investors were looking at a safe yet solid asset to park their funds in order to weather difficult market conditions. Since then, as Bitcoin and other cryptocurrencies have come crashing down, even cryptocurrency investors have been looking at gold in order to secure their funds while the market endures the downturns.

On the other hand, there are some notable people who believe that cryptocurrencies are linked with gold. For example, Chris Louney from RBC Capital Markets believes that there is a relationship between the yellow metal and Bitcoin.

In an interview with CNBC, he explains that while it is difficult to show a real correlation between Bitcoin and the precious metal, they started to notice that the relationship between Gold and Bitcoin turned mildly negative since the end of last year.

The correlation was also fuelled by increased trends of Bitcoin on search engines as the currency soared to almost $20,000 in December. He also says that post the crash of Bitcoin in January of 2018, he has not observed any change in the relationship between Gold and Bitcoin. He also says that as the technology matures the correlation will increase.

On the other hand, cryptocurrency stalwarts have reiterated that there is no relation between Gold and Bitcoins and instead saying that the price of the two commodities increasing simultaneously is due to geopolitical events and they have yet to detect any correlation between gold and cryptocurrencies.

Overall, it can be said that it is too early to declare a relationship between gold and Bitcoins as the market is too nascent. The vast availability of data is also complicating matters, and it would take several years for a clear picture to come up.