Many people were wondering how most altcoins will fair and where they are heading to in 2019. However, Stellar among some few top cryptocurrencies has indicated a positive path in 2019 and beyond as we above to end the first quarter of the year. Stellar which is at the 9th position on the top 100 cryptocurrency list, is mostly viewed by people in the cryptocurrency community as a rival to Ripple’s XRP.

Stellar aims at enabling the end user to become in control of their assets. Explicitly, Stellar is a cross border payment solutions, and its network combines smart contract protocols.

Stellar is involved in some exciting partnerships over the years. Some of these partnerships are ICICI Bank which is very popular in India and is the second largest bank in India by total assets and market share, SHIFT Markets, and lightyear, Deloitte which is a private consulting firm, Stripe which is a payment system that supports over 100,000 businesses and the Chinese giant Wanxiang. Stellar is also collaborating with the tech and software giant IBM.

Stellar has been one of the most striking payment networks for the past years and looks to keep the positive trend this year. This is good at lowering the price of the stellar lumens (XLM). With an impressive road map for 2019, great feature, new developments, and improvements, finally getting fully listed on Coinbase and with more collaborations in the pipeline this year, there is no doubt that Stellar is about the edge of a massive bullish breakout.

Price Prediction for Stellar (XLM) in 2019 and beyond 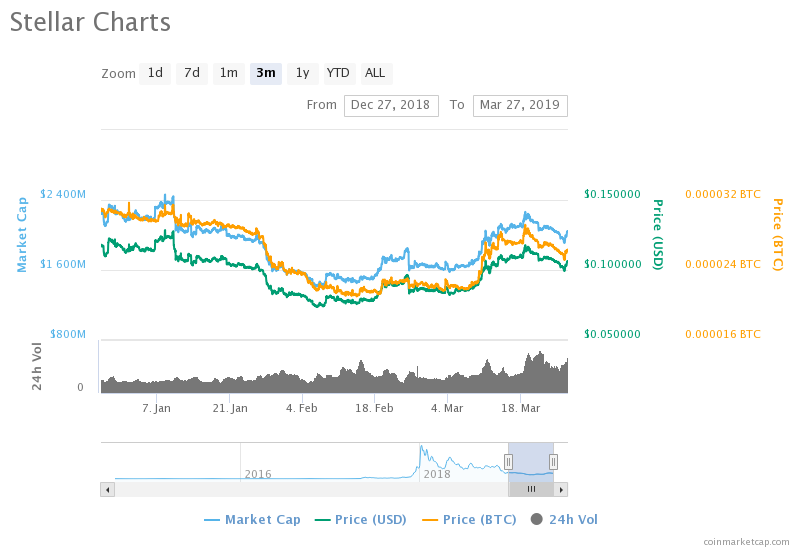 Predicting the future of any coin in the cryptocurrency market is very challenging as it has progressively been on an unstable trend from 2018 until the beginning of this year. Q1 2019 has seen a slow but quite a steady growth for the market which suggests a massive upward trend in the near future.

Stellar has great potential this year and beyond. As the cryptocurrency market is seen to be driving along with Bitcoin whether it is on a bull run or a bearish one, it is likely to see Stellar soar from the bull run that’s ahead for the market this year as Bitcoin shows major signs of such.

Stellar has seen positive growth since the start of March 2019 increasing its market cap. As momentum gets on stellar’s side, it gives the cryptocurrency the power to rise above $0.15 by the Q3 2019 and also break through its resistance level. Although the market seems to have slow growth, nevertheless, Stellar has the potential of testing $0.18 by the end of the year and may even reach $1 in 2021.