Weiss Ratings just put out its annual cryptocurrency report card. And it looks like they are giving the green light to curious investors.

Martin D. Weiss, the company’s founder loves the technology behind cryptocurrency and foresees a future where digital assets reign supreme. However, Weiss says that the cryptocurrency space is the riskiest place to invest your money. The Weiss rankings are meant to steer investors towards the digital assets that are building promising futures with strong use cases.

Weiss didn’t give any coins an “A+”, but still sees plenty of potential in several of the top tokens. In regards to timing, Weiss claims now is the time to buy.

“Despite lower prices since early 2018, our rating model gives us hard evidence that a critical segment of the cryptocurrency industry has enjoyed remarkable growth in user transaction volume, network capacity, and network security. Equally important is our finding that these improvements are often powered by an evolution in the underlying technology. Therefore, for those willing to take the risk, the best time to invest could be very near.”

When considering what grades to give each coin, Weiss holds adoption in high regards. With user bases that outnumber competitors, XRP, EOS, and Bitcoin got an “A” from Weiss. Ethereum checks in with an “A-” and Cardano, Steem, NEO, Zcash, Litecoin and Stellar all received a “B+”. 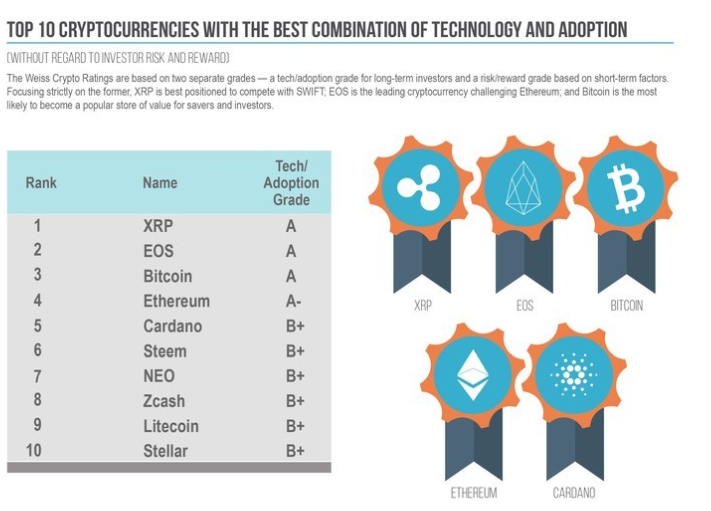 Weiss says XRP is in position to infiltrate the global finance industry. The A rating comes with an endorsement of XRP as a replacement for SWIFT, the current industry standard for cross border bank transfers.

EOS was also recognized by Weiss as a cryptocurrency with growing usage. According to Weiss, EOS is leading the charge of an industry-wide increase in the real-world application. All in all, the Weiss Ratings note that volume and daily transactions have grown because people are beginning to use DApps.

The Ratings are also notably higher than last year. Weiss says this is because the risk is actually smaller due to increased security and more viable use cases popping up all the time.