The day began slowly for XRP but has panned out to be one of its more profitable ones. Having begun the day with marginal gains, the altcoin has gained momentum and soared late in the day by more than 6%.

This has seen XRP climb from a little over $0.42 to break its mid-term resistance position of $0.45. This is a nice boost for the coin which has been struggling to keep up with other cryptocurrencies during bullish moves. This is evident in the fact that Ethereum, the largest altcoin in the world, has created a $10 billion market cap margin with XRP. What had been an ongoing battle between the two is no more. 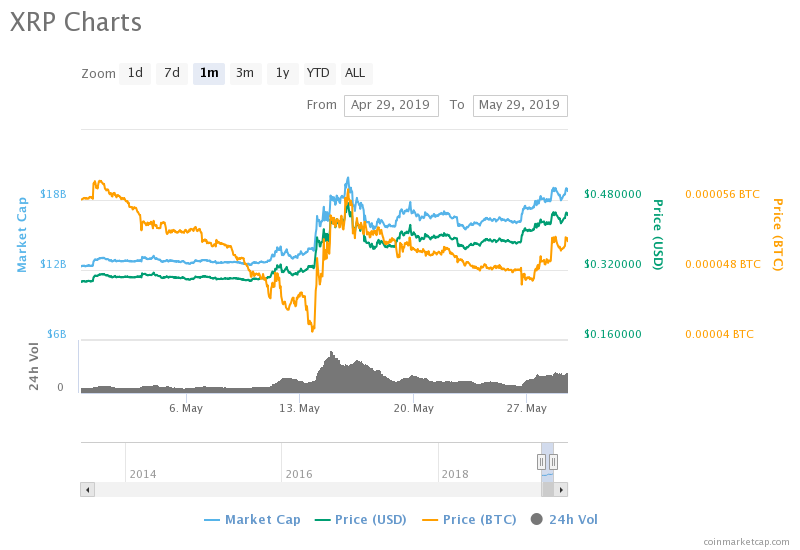 XRP’s surge seems to have caused an effect on other cryptocurrencies with most beginning to turn green after a slow start. The market was and still is expected to go through a major correction following a bullish couple of days.

However, experts have expressed that they expect prices to climb much higher than they have before this correction takes place.

XRP’s recent move comes after the altcoin signaled a bullish indicator that has not failed in the last couple of weeks. XRP has recently confirmed its Golden Cross. In the last couple of weeks, we have seen this indicator light up for Bitcoin and Ethereum as we reported and the same has seen the coins soar in the short term. It’s just getting started for XRP and we could see even more extended gains in the days to come.

Ripple’s XRP 2019 year high is currently $0.46, a position it is on track to break. If the positive momentum persists, XRP will break the $0.46 position and possibly attempt to reach $0.50.

XRP climbing above $0.46 would see it establish a higher support position and the bulls would likely aim for $0.48. This will keep the $0.50 position in play and ensure the next rally sees them attempt to break it.

At the time of press, Bitcoin is exchanging for $8,730 marking a marginal positive change in the last 24 hours. As prices continue to pick up the pace, Bitcoin could be heading above $8,800 and as momentum increases, could retest its year high of around $8,900.