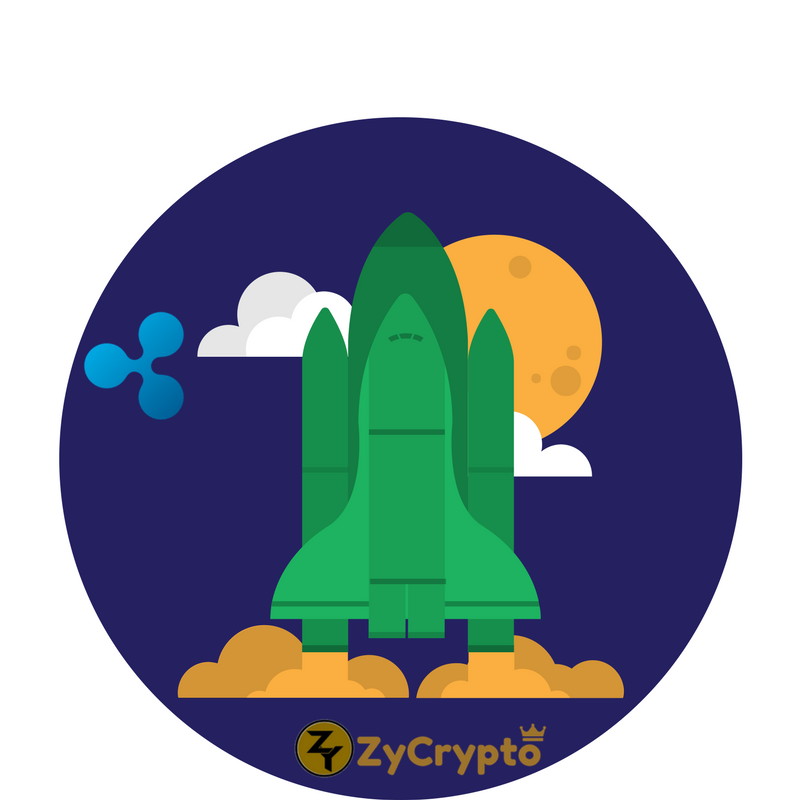 The Ripple Altcoin has gone back to the number four spot on the cryptocurrencies table as recorded on CoinMarketCap.  Since Bitcoin started its massive upward trend that has now balanced the Bitcoin Price at the $17,000 price area, most Altcoins have been mere shadows of themselves.
However, that is not to say there have not been price movements in the altcoins ecosystem. Just yesterday, the second in command cryptocurrency, Ethereum made a new all-time high with the ethereum price surging to $635, taking the Altcoin’s trading volume to a massive $5 billion.
The Word of Mouth Effect
The Ripple price surge is attributable to the fact that South Korean and Japanese banks are using the Ripple Altcoin to conduct payment trials. The three largest Bitcoin and cryptocurrencies exchanges in South Korea – Bithumb, Korbit and Coinone presently carry out over 50 percent of the global ripple trades, with the three heavyweights processing over $1.7 billion worth of trades in the 24-hour timeframe.
This has given the Korean exchanges a massive trading volume more significant than the combined daily trading of popular Cryptocurrency exchanges like Poloniex, Bitfinex, Bitstamp, Binance and Kraken.
Most South Korean investors usually take investment decisions by word of mouth. For instance if Mr. A purchases Buys Bitcoin and Moves on To tell Mr. B about his Bitcoin purchase, Mr. B would also go ahead and buy Bitcoin too.  Tony Lyu – Korbit co-founder and CEO has noted this word of mouth phenomenon.
The CEO has reiterated that when a significant Altcoin like Ripple skyrockets by 10 to 30 percent within the South Korean market, many other investors rush to put their money in it, and often this action triggers a short-term bullish trend in price and trading volume of the Altcoin.
The above phenomenon often plays out in cryptocurrencies like Ethereum, BitcoinCash, Ripple and Monero which has a massive following in the South Korean Cryptocurrency ecosystem.  Often the prices of these Altcoins would rise massively and would later decline considerably well because of the word of mouth tendencies of the South Korean investors.
The Ripple Surge
Today, on December 13, Nikkei – a major Japanese news outlet said in a report that key players in Japan and South Korea’s banking industry would begin to test run the Ripple Blockchain to see its feasibility in processing payment transactions. This move is to enable the banks to know maybe it could be used in carrying out international funds transfer and reduce transaction fees.
Since early 2017, the Ripple project founders-Ripple Labs have made successful efforts in helping some banks and financial services firms to use the Ripple Blockchain technology, which is faster and transaction fees come cheap on the Ripple Blockchain. This has made many Japanese banks and 61 other corporations to adopt the Ripple Blockchain technology.
Back in July, the global head of strategic accounts at Ripple Said:”We recommend these banks in Japan for taking a giant step forward on behalf of their customers. This is a great example of regional banks converging into a global real-time payments network for the greater good.”
The Implementation is set to continue till 2018, and if all goes according to plan, this significant achievement could even trigger a much more bullish trend for the Ripple Altcoin.