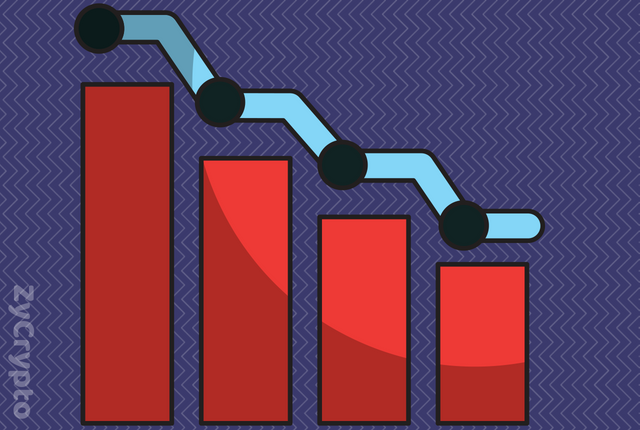 There seems to be a strong tsunami that is hitting the entire cryptocurrency market, irrespective of the activities involved, whether coin investment or the crypto exchange market.

Presently, Coinbase is the largest cryptocurrency exchange and it experienced some diversification into hedge fund management in other to reduce the fear that institutional investors have regarding the market.
A recent information shows that the largest cryptocurrency exchange in U.S experienced about 83% drop in it’s recorded trading volume from Jan 2018 to July 2018, which moved from around $21 billion in Dec 2017 to less than $4 billion at the end of last month.

Some of the factors that Might Have contributed to it are:

1) General market forces: the entire crypto market experienced an unprecedented shaking that resulted in the loss of value of most of the cryptocurrencies in the top 100. Recently, a post in Zycrypto stated that more than 270% in the entire crypto market had been lost  to the decline in market.
.
2) Increase in crypto tokens: previously, most initial coin offerings (ICO’S) accept payments majorly in bitcoin and ethereum. However, there has been an increase in the cryptocurrency options that could be used in the purchase of tokens which has seriously contributed to the decrease in trading volume in Coinbase that trades majorly on bitcoin and ethereum.
The token market attracted more than $12 billion in the first half of 2018 which is more than double its entire investment in 2017 which stood at $5.7 billion.
3) Increase in zero fee trading platforms: not minding the fees that Coinbase charges it’s more than 13 million users, this could not be compared to trading at no fees.
4) Increase in exchanges that accepts Fiat: previously, Coinbase is the cryptocurrency exchange that is synonymous to fiat to crypto conversion. However, many other exchanges has started to offer such services.
5) High usage of Tether: Coinbase does not accept Tether (USDT) for exchange. However, the stablecoin has shown itself to be a safe point for traders to avoid high liquidation of their investment. That gave exchanges like Binance and OKEx an advantage over it.
Ads by Cointraffic

$1.2 Billion Worth Of Bitcoin Leaves Coinbase In A Day, Signaling Heavy Institutional Accumulation