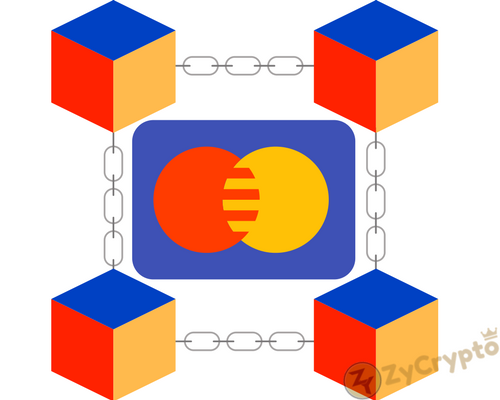 Global Payments and technology company, MasterCard is actively is determined to be at the frontline of the distributed ledger technology revolution.
The payments giants have filed an application with the United States Patent and Trademark Office (USPTO) for the registration of its “System For Payment Card Verification Via Blockchain.”
As stated in the document, the system saves the image of a user’s payment card on the distributed ledger network after it must have encrypted it with public and private keys, which would make decrypting the image for verification purposes during payment.
MasterCard firmly believes that this system will offer users a highly secure way to make payments as they will no longer need to carry their cards around since its already saved on the blockchain.
Once fully launched, the solution will make it impossible for bad actors to get peoples payment credentials from payment devices.
‘The transaction may be conducted via the display of a machine-readable code to the point of sale device, which may further prevent skimming as the reading of such a code can be more easily controlled via control of the underlying display; the display can be easily shielded and is often obscured when in a pocket or purse,” Mastercard revealed.
The card verification system on the blockchain is not the company’s first patent with the revolutionary technology.
Back in 2014, the financial services giant applied to patent a “Method and System For Instantaneous Payment Using Recorded Guarantees,” which is a super-fast method of sending money, powered by blockchain technology.
In a similar development, the USPTO approved the firms patent for a travel itinerary blockchain-based solution that would help travelers submit the travel needs on the blockchain and merchants will be able to view what the clients are looking for and submit bids to render the service to the traveler.

“The use of a blockchain can ensure that a traveler’s desired travel itinerary is publicly accessible to each merchant that is capable of bidding on the itinerary.
This enables all travel providers to have an equal opportunity to earn the business of a traveler, without requiring the travelers to seek out every potential travel provider and without the travel provider having to expend significant resources on marketing and outreach,” wrote Ankur Arora stated.