The highly anticipated Ethereum network upgrade has come to pass. After the event was postponed to late February, around block number 7,280,000, it seems it has been a success with the upgrades already activated. The upgrade is significant as many see it as a move leading to a change from the Proof of Work consensus to the more scalable Proof of Stake.

Leading up to the upgrade, Ethereum was expected to react with the success of the event pushing prices to soar despite people differing on whether it would be a success. The skepticism was not uncalled for since the upgrade has been postponed twice before with the most recent one coming a few weeks ago.

Then, there was growing concern that one of the upgrades would open up a window that would allow hackers to manipulate the network. This particular upgrade was canceled bringing the total number of upgrades to four from the initial five.

Unfortunately, the upgrade comes days after a huge drop at the beginning of the week. The drop has most certainly made it hard for prices to rally with most coins struggling with key resistance positions.

The case has been evident through XRP which despite being listed by Coinbase has failed to show the kind of impressive gains seen by other altcoins that have been listed on the exchange. After rallying immediately after the announcement and hitting as high as 10%, the coin has since recorded marginal gains. At the time of press, XRP is up by a little over 2%, trading for just over $0.32.

In Ethereum’s case, ETH has failed to respond positively despite the success of the upgrade. At the time of press, ETH is recording marginal losses of less than 1%, trading for $137. Should these prices pick up in the next couple of hours, as Ethereum network users continue to update their software, we could see a price re-test of $140. 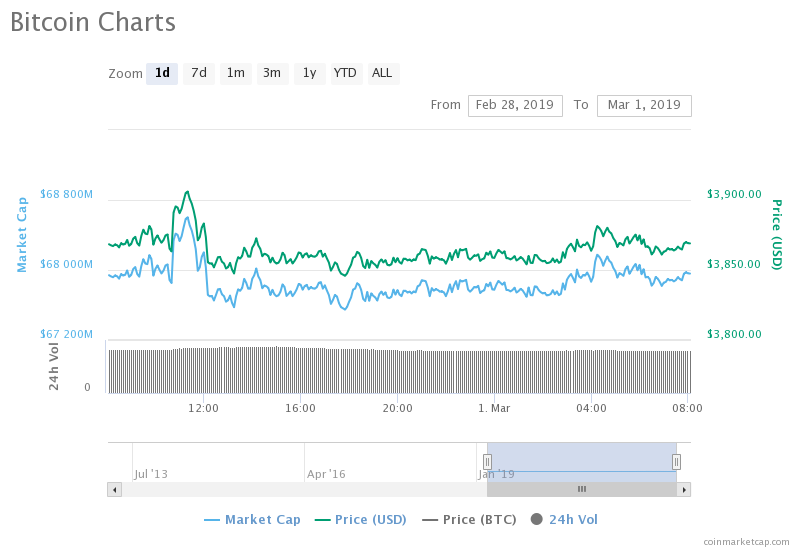 BTC is still struggling to break away from its $3850-3880 price range. The bulls are targeting the $3,900 position, but this resistance point has proven to be stubborn. At the time of press, the leader is recording marginal losses of less than 1% and trading for around $3,880. The $3,900 price remains crucial for the coin in the short-term as it continues to attempt a break away from the recently established bear trend.