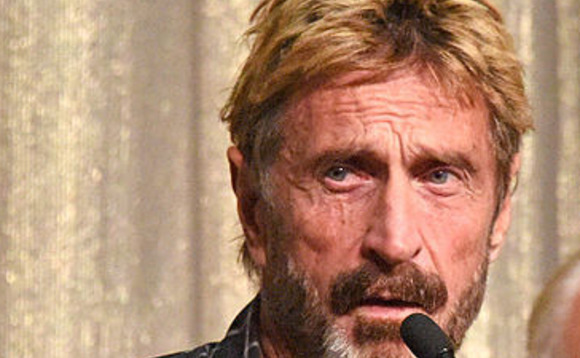 John McAfee made yet another profound statement today as he released the “Declaration of Currency Independence.”  The statement released by Team McAfee insists that we must break free from the oppression that fiat money, controlled by and manipulated governments has over the population, especially workers.

“Humanity has fallen under the domination of control through Fiat, but this domination has only increased the pressure of humanity seeking a viable escape.”

The declaration also argues that a true free market does not exists and that the value placed on fiat currencies around the world is altered and false.

“The expenditure of energy by man, machine, and Nature is the sole source of Value. These sources and their result have been devalued through the intentional inflation of printed currencies.”

Team McAfee’s declaration states that the citizens of every nation around the world are subject to a system where a few at the top perpetually and intentionally manipulate laws and regulations to widen the gap of wealth and wield more control on the masses.
The answer provided by the declaration is the proliferation and mass adoption of “Bitcoin and its cryptoasset derivatives.”  With the advent cryptocurrency and blockchain protocols, printed currencies will become obsolete and and move away from fiat allows the masses to take control of value for the first time in history according to the Team McAfee project.
McAfee has been accused of shilling certain cryptocurrencies in paid marketing campaigns, but his social media posts are filled with lines like “we are all in this war together.”
The crypto space is filled with many different ideologies and political beliefs; but, wealth disparity is a widely shared concern and exchanging power from elites to the people is a common theme. With this movement, McAfee, who has said he was in favor of the Trump Presidency several times, expresses a very similar thought to Charles Hoskinson’s take on China’s social points system.
Hoskinson then knocked the 45th President of the United States in the following comment, showing how people who seem to be in opposition can express the same ideas but portray them in a different manner.
The wide ranging the political belief system across the crypto and blockchain sector all come together on the idea of decentralization.  And the believers of the crypto movement tend to exhibit the desire to create peer to peer networks and give the power to the people.