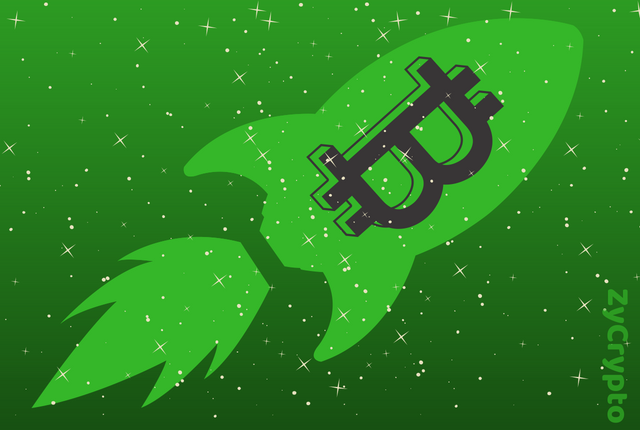 For about a month bitcoin has been bearish and gains have been less than impressive. For some time, it seemed like bitcoin would never track back to the $7K mark. However, in an unprecedented move on Tuesday July 17, bitcoin shot up by about $600 in less than an hour.
At the time of press bitcoin was trading at $7,364, a price that has not been seen for well over a month, in fact anything close to $7,000 has not been recorded in more than a month.
In what begun as a typical Tuesday with prices hanging around the $6,726 mark, turned out to be a bullish run that saw the virtual currency gain $600, representing a 10% price increase in less than an hour. Before the price spike, bitcoin recorded a price index of $7,408, an unchartered territory since June 10.
Yesterday the crypto community received some major news that saw bitcoin jump from $6200 to $6,600, this came in the form of an announcement from BlackRock that they were considering investing in bitcoin and would be looking to take advantage of the crypto market.
Following the announcement, bitcoin has been steadily trading roughly at $6,730 up until the price rally that saw the crypto add some $9 billion to its market cap. The price surge has seen other cryptocurrencies such as Ripple and Ethereum enjoy a 5% to 10% price increase in the last 24 hours. However, at the time of press bitcoin was the greatest gainer in the cryptocurrency market.

Today has seen the appointment of a new CEO by U.S investment bank Goldman Sachs. David Solomon who is currently the banks chief operating officer will be taking over from Lloyd Blankfein who currently holds the office and will continue to do so until October.
Just last month, David Solomon said that the company is looking to add to its cryptocurrency services. This will be propelled by the growing demand and surge of the currencies led by the leading crypto, bitcoin.
It remains unclear what led to the price surge, from the SEC saying that they have received an enormous number of positive emails on bitcoin ETF’s which are potential game changer within the industry, or whether it was the appointment of the new Goldman Sachs boss or merely the recent backing from Wall Street by BlackRock and Antonymous Partners.