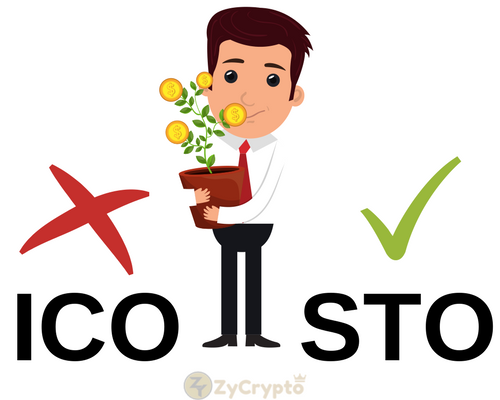 Initial Coin Offerings (ICOs) is a trending word since 2016. It is a term used to describe the strategy employed by new cryptocurrency companies to raise funds for new projects. ICOs were a massive success in 2017, generating over $6 billion for startups in 2017 alone.
As much as ICOs are beneficial for these startups, one cannot say the same for cryptocurrency customers. Hence, the Securities and Exchange Commission (SEC) has tagged it a fraudulent fundraising process.
According to reports, the Chief Executive Officer of Overstock, Patrick Byrne, revealed that there is a new, safer strategy to raise fund in the cryptoverse known as Security Token Offerings (STOs).

“It is the new term. The industry is distinguishing very clearly now between ICOs and STOS,” the CEO said.

These STOs allow investors to purchase digital tokens as a public offering, just like it is done with the ICOs, but there is a clear difference. Unlike the ICO fundraising, these coins will be backed by the company’s assets, revenue, or profit. It is just like purchasing shares in a company but with more versatility.
In the interview, Byrne said the STO would show regulators and other authorities that the issuing companies are transparent in their fundraising activities as the tokens are actual securities.
The actions of fraudulent players destroyed the ICO market, Byrne said.

“The ICO craze of last year created a toxic waste dump of financial assets. To me, that world of ICOs is a Superfund site. What we’re developing is a mechanism so that there will be a legal way to go forward, and not create any new toxic waste.”

Byrne’s company is currently under investigation, and when asked, the CEO didn’t comment on the charges against his company but stated that he is giving his full cooperation.
Overstock launched its ICO in December, promising its customers that the Offering would comply with the SEC rules.  In February, the SEC asked Overstock to submit some documents related to the Offering as part of the investigation.
Earlier this month, the company announced the prototype trading platform for its tZERO token. The platform will support the new security token.
The e-commerce giant is aggressively invading the blockchain industry. Byrne said that the company would be reorganized to focus on the blockchain.