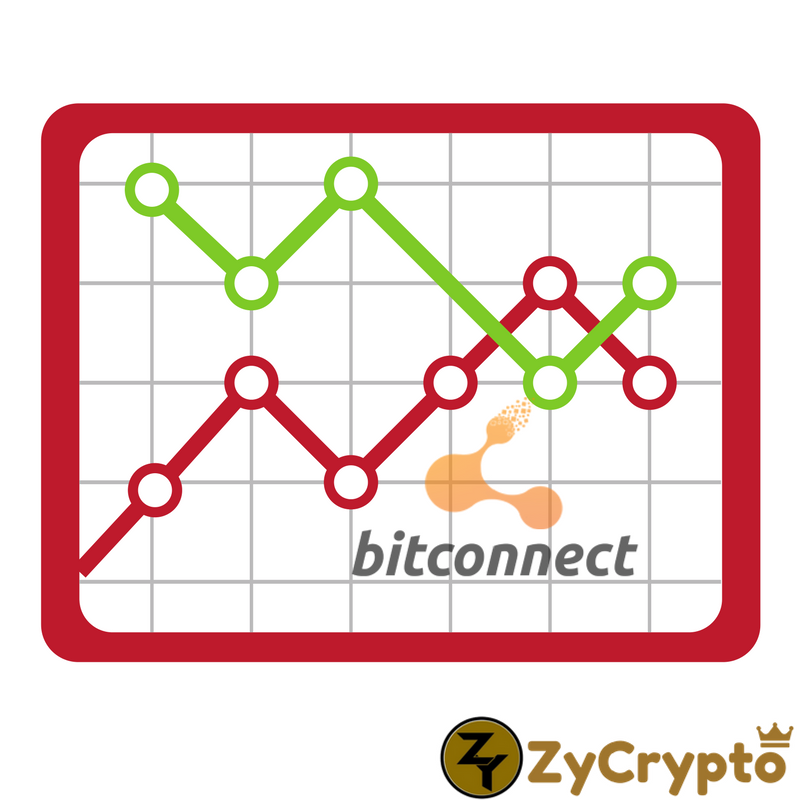 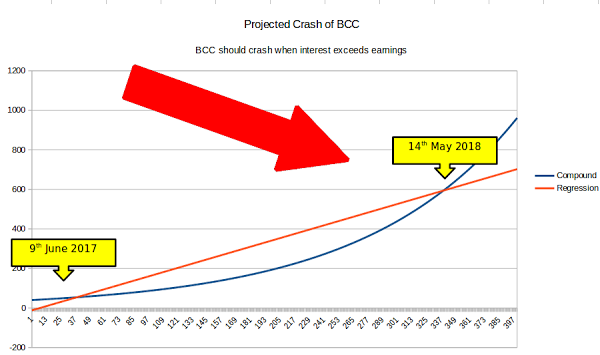 I used a compound interest and regression algorithm to predict when Bitconnect (BCC) will crash given the assumption that BCC is a Ponzi scheme using revenue to pay the interest for previous investors. My projection shows that the compound interest exceeds the revenue on Sunday 13th May 2018.
Bitconnect (BCC) is a cryptocurrency that allows investors to lend their currency in return for around 1% interest everyday. The platform allows reinvestment of $10 and up, thus allowing compound interest to accumulate. The platform is heavily promoted online by BCC affiliate Trevon James who regularly posts flashy videos advertising the lending scheme.
Many critics have accused BCC as of being a Ponzi scheme because they assert that the 1% per day return and compound interest is not sustainable. Bitconnect is currently down at 23rd position on CoinMarketCap.
One YouTube personality, SunnyDecree, suggested that the BCC price itself resembles the gains made by compound interest. He suggests that BCC is using the revenue generated by new investors to pay the compound interest of previous investors.
A Ponzi scheme is where the funds from new investors are used to pay old investors or ‘robbing Peter to pay Paul’. It’s named after Charles Ponzi who in the 1920s created such a scheme. A Ponzi often crashes when revenue dries up or slows down because the expenditure exceeds revenue.
I created a simple projection using just a compound interest and regression algorithm to predict when Bitconnect may crash. The regression model is based on the historic prices of BCC and the compound interest starts around mid-2017 when BCC started to kick off. My assumption is that when the interest exceeds the predicted BCC price the scheme will be unsustainable and will crash.
My linear regression model had a R² of 0.88 and a standard error of 40.64 suggesting that 88% of the BCC price can be explained by my model. I started calculating my compound interest 9th June 2017 at 0.8% interest and a price of around $40.
My projection, for example, says that on 6th January 2018 the BCC price needs to be $216.62 to pay interest, while the predicted actual price is projected at $366.77. This instance suggests as of today we would expect BCC to be in the green and balanced. The actual BCC price for today is currently $410.50 which is well above the needed price to pay compound interest.
My model, however, predicts that on 13th May 2018 that BCC will need $595.91 to pay interest when the projected price is $594.69. At this point the compound interest will continue to accelerate and will make BCC unsustainable. 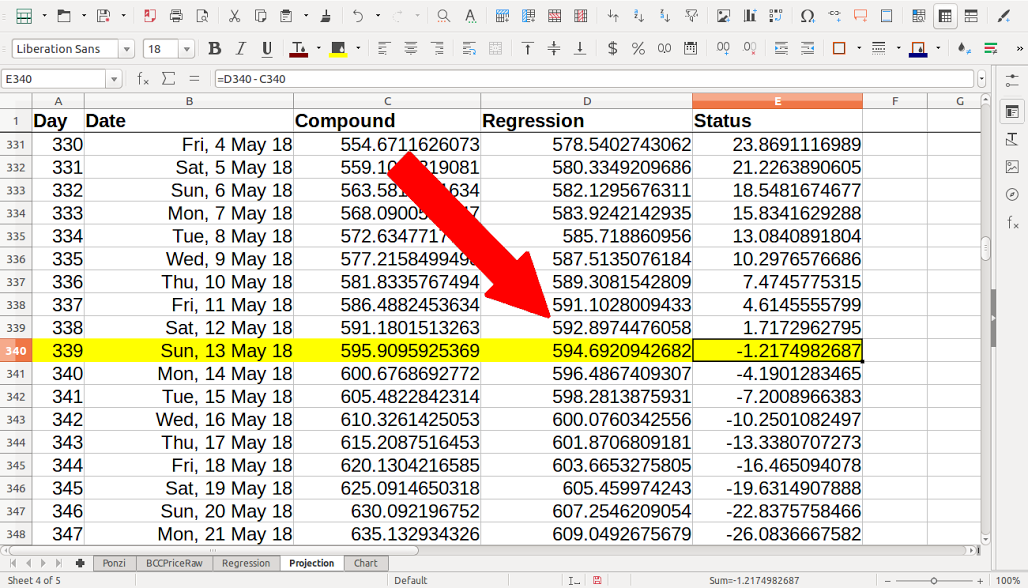 Bitconnect has just announced their new platform BitconnectX which some have suggested may be an exchange platform. Some may ponder that BCC is less likely to crash if they are investing in new platforms.
The platform, alternatively, may be investing in new assets to buy back the risk of losing money. Charles Ponzi, for example, bought a new Macaroni factory back in the 1920s in a desperate attempt to balance the books and pay back investors.