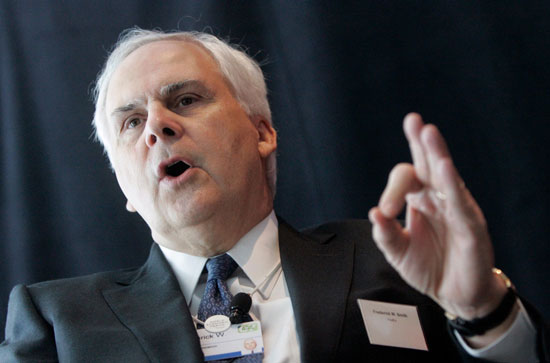 It could take a long time before the world can fully exploit the full potential of blockchain technology across several industries and FedEx CEO and founder, Fred Smith, has nothing but hope and optimism in what changes the technology could spark in the coming years.
Smith, speaking at the Consensus 2018 event held in New York, highlighted key areas blockchain technology could help reduce friction in cross-border shipments while drawing comparisons to how far the modern trade has come.

“In the early ’70s the freight was delivered to a shipping company or postal service, and we’d wait and hope to get it out at the other end. So we introduced the ability to track-and-trace, initially because we needed it for our own internal operations, but eventually we realized that the information was extremely valuable to our customers,” he stated.

The advent of the Internet made this information readily available to customers, but blockchain has the potential to do even more.
As a “chain of custody systems on steroid, it is able to keep these kinds of custodial records in a completely pristine unalterable fashion. This could be a very big thing in terms of supply chains and the entire transportation sector. It is beyond massive”, Smith enthused
Even the biggest issue for logistics across borders, due to varying standards and regulation across nations will be addressed efficiently by the existence of a blockchain.
“For cross-border shipments, ‘trust’ is the legal requirement for every transaction. What blockchain has is a potential for the first time ever to make the information available to everyone,” he noted.
While there is yet to be an open announcement by FedEx on blockchain developments with the organization’s framework, Smith’s comments on the panel reveal that it would not be so long until we see one.
The firm had already pledged allegiance with the Blockchain in Transportation Alliance (BiTA), in a bid to research and figure out the numerous ways the technology can help improve their activities and potential revenue in the future.
With FedEx at the heart of blockchain adoption in the transport industry, the stage is set for landmark reformations, and we will keenly watch as it unfolds.