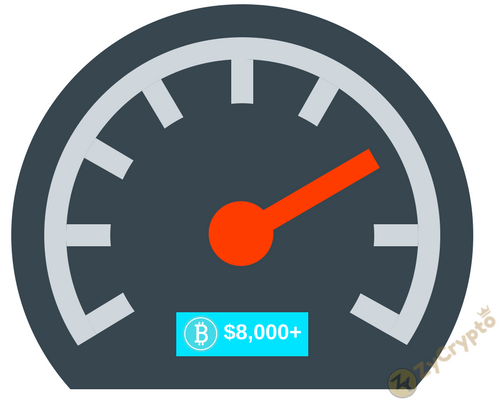 For months now the bearish market trend has persisted, with the bitcoin price hitting a low of $6000 at some point. However, it seems the bulls are gradually regaining consciousness as the price of bitcoin sharply hit $8000 today.
The virtual currency market cap momentarily kissed the $300 billion price area earlier today, due to a bear trap in the bitcoin futures markets, according to reports.
The effervescent bitcoin price surge fueled the cryptocurrency market cap, giving the markets a massive $30 billion gain.
Within a space of 60 minutes, the entire virtual currencies cap hit $301.8 billion before retreating and comfortably sitting at the $298 billion price area at press time. It is important to note that the markets last saw a single-day price gain of 12 percent in December 2017.
Today, the bitcoin price did a surprise moon shot, gaining $1,000 in less than an hour. The price of the world’s pioneer crypto briefly touched $8000 price region, before settling at $7,626 at the time of writing.
Experts have quickly attributed to sudden surge to a “bear trap.” A bear trap refers to a situation whereby margin traders who are trying to short an asset get liquidated due to a sudden price increase, forcing them to hastily change their positions and buy at market prices to enable them to cover their position.

“whilst there has been some stability in the cryptocurrency markets over recent weeks, we’ve seen a record number of short positions building on major exchanges. When prices began to rise this afternoon, a large number of shorts with big positions were squeezed.
The resulting interest from buyers increased momentum, causing the price to jump $1000 in 30 minutes,” said eToro analyst, Matthew Newton.

Also, another quantitative developer and data scientist opined that since there have been quite many short trades in recent times, it is only healthy for some of these traders shorting the market to get liquidated once there’s an increase in buying volume.
The ratio of short margin trades versus longs has been increasing recently. Buying volume ticked up today and a lot of these short trades got liquidated, helping fuel the rally, said Nick Kirk, a data scientist at Cypher Capital.
It may interest you to know that the bitcoin price rally has also boosted the price of ethereum and other altcoins.
At press time the price of the number two crypto is at $462, with a market cap of $45.68 billion as seen on coinmarketcap.
Will this recent surge usher in the much awaited bullish trend? only time will tell.